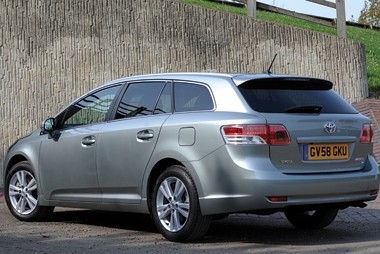 Sitting well below the crucial 160g/km of CO2 tax cut off level for writing down allowances, the 150g/km Avensis Tourer 2.2 D-4D – Toyota’s flagship estate offering – has already earned itself a place on many fleets.

While visually and dynamically it doesn’t set the world on fire, there are more prosaic reasons why fleets have warmed to the Toyota.

First of all, fuel economy. Toyota claims 50.4mpg on the combined cycle, but I’ve been averaging a very impressive 57.2mpg during my time with the car. It’s not very often we exceed (or, in fact, get close to) a manufacturer’s figures so this is a big plus point for the Avensis.

And unlike some of its competitors (the Honda Accord Tourer I ran previously springs to mind), this estate is fit for purpose by being capable of carrying significant loads.

Luggage space is 543 litres with the rear seats up and 1,609 with them folded down. That’s more space than the Vauxhall Insignia Sport Tourer, but down on the cavernous Ford Mondeo and Volkswagen Passat estates. But in outright terms the Mazda6 estate leads the way with 1,751 litres of space.

On running costs the Toyota also performs well. Our T4 version will cost 38.64 pence per mile (ppm) over three years and 60,000 miles, according to the Fleet News running cost database.

These figures reveal a telling tale – the Avensis is a sensible fleet car that is neither the best nor the worst in class – and that’s not always a bad thing.