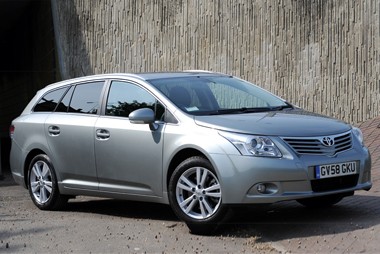 The chance to run a side-by-side comparison of Toyota’s latest Avensis Tourer against its higher-brow competitor, the Honda Accord Tourer presented itself recently.

Having driven the Accord for the past six months, I have come to appreciate its benefits – well engineered, attractive squat stance, sporty drive, superb driver accomodation and clever dash layout – but I had also come to discover some of its downsides, including the very cramped rear seating, its miserly luggage capacity and its overly light steering.

Honda pushes the Accord as a 3 Series rival, but it will also sit alongside the higher-specced Mondeos, Insignias and Avensis on the company car choice list.

While the Honda has the more aspirational badge, this Toyota has a far more impressive sepcification and I was to discover it had more surprises up its sleeve.

While the Accord has the more rewarding drive, despite that light steering, the UK-built Avensis is still an accomplished all-rounder.

While not excelling in any one area, as a package it is both competent and attractive.

But given the choice between the two, which should the company go for?

The driver will head to the Accord for its styling and badge.

The manager will also be attracted by the Honda’s 38% CAP residual value forecast, compared to the Avensis’ 34%.

But the Toyota should not be dismissed. It has low maintenance parts; for example, the car has a maintenance-free timing chain, a low-cost filter which only needs partial replacement (a 45% cost saving) and long-life spark plugs (23% cost reduction).

And, according to Toyota, it has lower than usual repair costs thanks to bumpers and headlights that have been designed to minimise replacement time and cost.

Over a 1,000-mile test run, it also returned an impressive 48.8mpg – 7mpg more than the Accord – and the closest I have ever come to meeting the manufacturer’s published figure, which in this case is 50.4mpg.

The Avensis 2.0 D-4D 130 saloon produces even less CO2 at just 134g/km thanks to Toyota’s revised Optimal Drive technologies which feature across the range.

The saloon and tourer body styles were created in parallel, so the tourer was designed specifically for its purpose, rather than being simply an elongation of the saloon with a raised rear end.

At 4.765m the Avensis is slightly longer (5cm) than the previous model.

Specification is high and will tempt many company drivers. It has electric memory heated seats, rain sensing wipers and auto headlights.

Dual air con and a key that unlocks the doors while still in one’s pocket are also included in a package of toys that make business motoring so much pleasanter – and completes a package that our Accord finds hard to beat.

But what finally swung the vote in favour of the Avensis was that it could swallow the family’s luggage – something the Accord failed miserably to do.

Cargo space – 543 litres with the seats up - is 137 litres more than the Accord offers.

And the fact that it can carry our luggage and still return an additional 7mpg is why the Avensis beats the Accord.