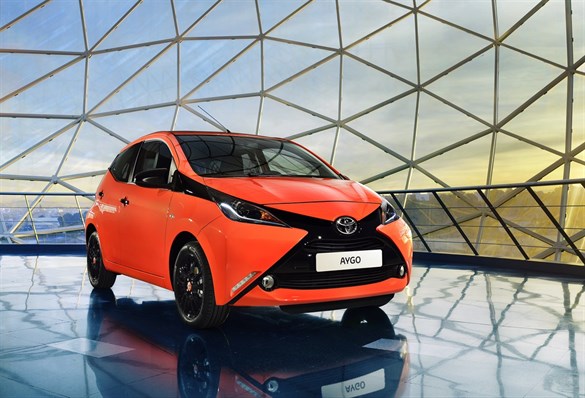 It’s probably no surprise to readers of Fleet News that small cars are low-profit for those who produce and sell them. Some manufacturers choose to produce them in countries where labour rates are lower, or to team up with other manufacturers to share development costs.

The economies of scale delivered by building a number of cars off the same platform with minimal changes are also a benefit of the latter method. The Toyota Aygo falls into this camp, and the second-generation model was launched in 2014.

It is built in the Czech republic, alongside the Citroën C1 and Peugeot 108. Its predecessor, launched in 2005, also had Citroën and Peugeot counterparts, although with the second-generation model there is a greater degree of differentiation.

The Aygo certainly stands out, with the bold ‘X’ motif across the front of the car. It’s available in a few colours, depending on the hue chosen for the body of the Aygo, and all are eye-catching, especially the black finish on our orange test car.

The Peugeot 108 and Citroën C1 have more similarities, and, arguably, all cars have a broadly similar interior, apart from individual brand identification. Peugeot’s interior design proposal has been successful, while Toyota’s was used in the original Aygo, C1 and 107.

Peugeot and Citroën have also succeeded in adding another petrol engine to their ranges (an 82hp, 1.2-litre, three-cylinder engine of their own making), while Toyota has resisted, suggesting its customers are happy with its own 68hp 1.0-litre motor.

This is a shame as, although this sector of the market  is budget-conscious, the larger engine is economically- frugal.

Progress in the Aygo can be laborious on roads where you need to change down to overtake. It’s nippy enough around town, however, and is easy to drive – just as a small car should be.

Interior space is a little cramped, although with a five-door option, the Aygo is more practical than a Fiat 500 or Vauxhall Adam, and just as desirable from a style  perspective. Boot space is limited, but has increased over the first-generation Aygo.

Although it might not be the most spacious choice  available, the Aygo has a stronger personality than the Hyundai i10, which is high on space and quality, but is lacking somewhat in character.

The Aygo’s predecessor achieved a four-star score in Euro NCAP crash tests when it was new, but a 2012 re-test rated its performance worthy only of three stars as criteria for the NCAP scores had strengthened in the interim. This new model achieved a four-star result last year, which is as good as the majority of its rivals.

Our X-Cite special edition test car is only available in the vibrant orange and black finish, although other models have more choices. It also comes with digital radio, a reversing camera and 15-inch alloy wheels (in gloss black for the X-Cite). The Aygo strikes a strong balance between low running costs and enough personality as a company car for someone to enjoy the ownership experience.