IN September, Nissan set the scene for a battle royale in the 4x4 pick-up sector by launching the new Navara, a vehicle which left the opposition standing in terms of size, power and driveability.

Just a month later, Toyota has replied with a new Hilux. With a new Mitsubishi L200 on the way early next year, Britain’s pick-up sector is about to move on to a whole new playing field.

Built in South Africa, the new Hilux will be offered in single and double-cab formats but with only one engine – a common rail 2.5-litre diesel offering 102bhp – way short of the Navara’s staggering 174bhp. But Toyota officials say that this model is the first of a roll-out of other variants. Both higher-powered versions and a king-cab will be available next year.

Outside, the new Hilux is considerably bigger than the old one. Its length has increased by 340mm to 5,255mm, largely because of a longer wheelbase, which now measures 3,085mm. The width has grown by 65mm while the height adds 30mm over the old model. The load area also grows, so single-cab models have 15% more space while double-cabs increase by 30%.

The cabin now looks more like a car, with conventional-style controls and switches, rather than the van-style controls the old one had. In the double-cab, Toyota claims there is as much legroom as in a upper-medium car.

While companies buying the Hilux for business use won’t be affected by benefit-in-kind (BIK) tax considerations, drivers who choose these vehicles as a way of cutting their tax bills – and there are quite a few – are about to be hit in a big way.

Until April 2007, BIK tax is based on a £500 loading, which means a 22% taxpayer will only have to cough up £110 a year. After that date the loading will increase to £3,000, meaning an annual tax bill of £660. It’s a big leap but even the higher cost is still a reasonable amount for a vehicle of this type.

The Hilux looks very similar to the Navara – and no doubt when the new Mitsubishi L200 arrives next year it will look similar, too. They are big, brash, bold and beautiful if you like that sort of thing.

Only double-cab versions were on offer for our test drive and once aboard, it was obvious that Toyota’s boast of car-like cabins was not an idle one. Front seats are wide and comfortable while there is plenty of legroom for rear seat passengers.Gone are the old ‘Tonka-toy’ knobs and switches, replaced by a stylish car-like dash and upmarket fixtures and fittings.

The roads around Marbella revealed plenty about the new Hilux. On fast roads it struggled – 102bhp isn’t a lot for a titan like this and with no load on the back, it whined and groaned like a cissy even on relatively gentle inclines.

But heading off-road the Hilux was more impressive. While our ‘dirty’ section wasn’t too challenging, there were some pretty steep slopes to negotiate, along with rough pits and lots of loose shale and with four-wheel drive selected and second gear engaged, there was never any suggestion that it was going to struggle.

The five-speed manual gearchange was slick and the power steering light yet precise. The Hilux retains its second gear lever for changing between two and four-wheel drive while the Navara has a switch on the dashboard.

SO far, with just the Nissan Navara and Toyota Hilux to choose from, it seems fleets have a stark choice – raw power from the Navara or the Hilux’s lower running costs.

For those who feel the Navara is too powerful and the Hilux too weak, maybe it would be better to wait and see what extra power Toyota will offer next year. Or will Mitsubishi play a sneaky hand and pitch its new L200 halfway between the two? 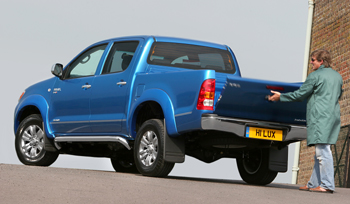