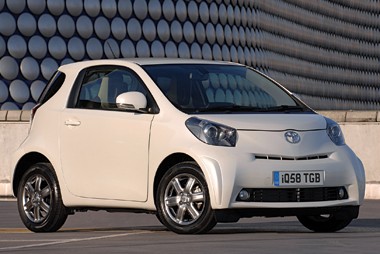 Downsizing is a popular buzzword as lowering costs dominates many companies’ thoughts – and cars don’t get much smaller than the Toyota iQ.

The diminutive vehicle is the latest offering in the growing city car sector, but is the first semi-premium model in the segment.
Thanks to their low running costs and front-end prices, city cars are becoming more relevant to fleets and user-choosers who don’t need much space.

The segment is expected to account for 7% of total European car sales by 2010, while their relevance to fleets has been demonstrated recently by meter reading company AccuRead placing an order for 1,320 Citroën C1s (Fleet News, April 2).

Traditionally, city cars have been cheap and cheerful and their equipment levels, refinement and quality have reflected that.
But now Toyota has upped the game to appeal to people who don’t want to sacrifice the feel of larger cars.

Just shy of three metres long, it is 42cm shorter than its Aygo sibling and – apart from its peppy 1.0-litre engine – shares little with it.

Clever engineering means front seat passengers are well catered for on space – there is plenty of room to stretch out. It feels like a car from the supermini class.

But sacrifices have been made further back. The iQ is a four-seater but only one of the two rear seats realistically has room for a passenger (the front passenger seat moves further forward than the driver’s to create the space). The boot is almost non-existent with the back seats in place.

On the road the iQ offers an excellent mix of the benefits both city and larger cars can provide as ride quality is impressive and its refinement and feeling of solidity is far better than can be expected from a vehicle of its size. The city car traits of being quick and nimble around town with light steering are also to the fore.

The city car sectors’ strength of low running costs remains present – iQ offers a claimed combined fuel economy of 65.7mpg and CO2 emissions of 99g/km. Its 67bhp engine lacks acceleration on the open road, but is generally able to keep up with the flow of traffic.

It has also received a maximum five-star rating in the Euro NCAP crash safety tests. Altogether, as urban transport, iQ excels. It looks great, drives well and is cheap to run.

But – and this could be a big but if downsizing is all about cutting costs – it does carry a high front-end price.

At around £2,500 more than a mid-range Aygo and about the same as a mid-range supermini, fleet operators face a tricky decision as to whether the iQ is a sensible option for the driver list.

P11D Price
The iQ is well equipped, but that doesn’t justify the front end price – £1,000 more expensive than the Fiat 500 and its lifestyle ambitions, and almost £2,700 more to buy than the cheapest car here – Citroën’s C1 which offers similar space and performance.

Emissions and tax rates
All four cars fall into the same 10% benefit-in-kind tax band, so the iQ’s high front-end price counts against it. It will cost a base rate taxpayer £209 a year in company car tax, compared to £155 per annum for the Citroën, £167 for the Ka and £188 for the Fiat.

SMR cost
The Toyota and Fiat come with 15-inch wheels, which spell higher tyre replacement costs than the 14-inch items fitted to the Ford and Citroën. The Fiat offers 18,000-mile service intervals, the Ford 12,500 miles, while the Citroën and
Toyota need garage attention every
10,000 miles.

Fuel cost
The iQ leads the way on frugality, with Toyota claiming it will return an average of 65.7mpg – or £3,708 in unleaded over 60,000 miles. The Citroën is next on 61.4mpg, while the Ford and Fiat share the same engine, returning combined economy of 55.4mpg.

Wholelife cost
The Citroën pulls out quite a convincing victory – although 0.85ppm is not a large amount on its own, when you’re talking such low running costs it makes a difference. The Toyota overcomes it front-end price to finish around 1ppm behind the Citroën.

Verdict
Looked at in isolation, the Toyota iQ is a good car. It looks funky and fresh, is well built and good to drive, while it has exceptionally low CO2 emissions which spell zero road tax. But its front-end price is quite a bit higher than the rivals assembled here.

For fleets who want to downsize into the cheapest possible car in terms of running costs, and drivers looking to minimise their benefit-in-kind tax liability, there is only one option here – Citroën’s C1. It may not have quite the road presence of the iQ, and it may not be quite as well built, but as a complete package it is the best car here – company car tax of £13 a month is hard to argue with.