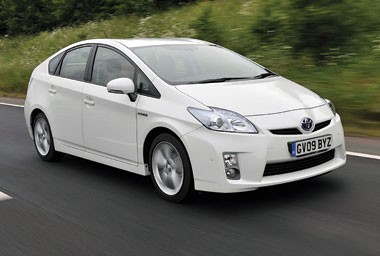 While some manufacturers are getting excited about the prospect of launching their first hybrid models, it is worth remembering that Toyota has been offering petrol/electric cars for the past 12 years.

The third-generation Prius goes on sale in the UK in August, delivering more power yet fewer emissions.

That means benefit-in-kind tax bills based on 10% of the P11D price, plus the added benefit of a 100% first year writing down allowance thanks to being a hybrid.

The current Prius emits 104g/km and returns 65.7mpg, showing Toyota’s pace of development in this field.

Since the Prius brand was launched in 1997, the power of the combined petrol and electric motors has increased by 35% yet fuel consumption has been reduced by 23%.

And that’s without factoring in the extra size and weight of the new model which, at 4,460mm in length, is 15mm longer than the current version.

This extra size and, no doubt, Honda’s move to cut prices of its Insight hybrid to £15,490, have resulted in Toyota pitching the new Prius at eco-versions of the upper-medium pack, most notably the Ford Mondeo Econetic, Vauxhall Insignia Ecoflex and Volkswagen Passat BlueMotion.

But clever packaging means the new Prius offers a very spacious interior, with plenty of room for four adults and a decent amount of luggage space, too.

The interior is also neatly designed, with a large digital instrument cluster mounted in the centre of the dashboard.

The gearbox, heating controls, and stereo all housed in a raised centre console which creates room beneath for storage.

Prices remain unchanged from before at £18,370 to £21,210, and standard equipment on all models includes keyless entry and ignition, a head-up display, automatic air conditioning and seven airbags – the latter giving Toyota full confidence in achieving a maximum five-star EuroNCAP crash test rating.

However, the extra weight of equipment and the larger wheels do impact slightly on economy and emissions, although as all versions are comfortably below 100g/km there are no tax implications other than the extra front-end cost.

On the road the Prius feels a far more accomplished car than its predecessor, with a quiet engine, improved automatic gearbox and a higher standard of build quality.

However, despite its engine growing from 1.5 to 1.8 litres the Prius still only offers 134bhp and torque of just 105lb-ft.

That means making progress is never more than adequate, and perhaps limiting the Prius’s appeal to drivers covering 20,000 miles a year.

The new Prius is the most accomplished hybrid yet.

However, for higher mileage drivers the traditional upper-medium diesel in ‘eco’ tune is still the better bet.