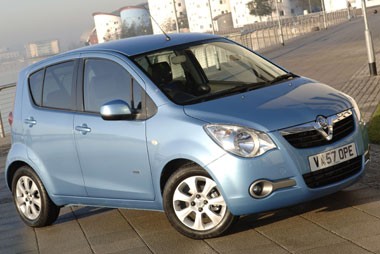 Remember when Carol Vorderman presented Countdown a decade or so ago?

She was, to male admirers, an acquired taste – excellent at what she did, but not exactly an object of desire.

Then, seemingly out of the blue, she vamped up, started appearing on red carpets in revealing dresses and broadened her appeal massively.

The new Agila is clearly modelled on La Vorderman.

The old Agila had four wheels and a boot and would quite happily get its occupants from A to B.

But it was bland.

This new offering, however, is a whole new kettle of consonants. It does everything the old Agila did, but with style and flair.

The exterior boasts actual curves for the first time and looks quite funky, even if the rear is reminiscent of the Fiat Punto.

Power comes from either a 1.0-litre or 1.2-litre petrol engine, but of most interest to fleets is the 74bhp, 1.3-litre CDTi diesel engine, carried over from the out-going model but with numerous refinements.

Economy is up to 62.8mpg, and CO2 emissions fall to 120g/km, within the limit for exemption from the London Congestion Charge and putting it into the lowest benefit-in-kind tax band for diesels (13%) from April.

A Vauxhall spokesman said fleet sales were difficult to predict.

He said: “We expect fleets to take less than 20% of total sales. The majority of fleet customers will be health authorities and the public sector.

"Corsa is a much more fleet-relevant car, but there are certain qualities that make Agila preferable to some.”

The Agila’s interior design is unremarkably decent, but build quality is good, and everything feels solid even if some of the materials err on the cheap side.

Those with a fondness for soft-touch plastics may feel let down.

The driver’s seating position is quite high, which takes some getting used to.

There’s plenty of room in the back for two adults, although trying to squeeze in a third may elicit some protests.

The boot is on the small side, but should you need extra space, then the seats fold down easily and provide 1,050 litres of room.

The 1.3-litre CDTi engine sounds gruff and rattly, but thankfully is not quite so coarse in its power delivery.

The soggy old model completely failed to deliver on the handling front, but the new one is much tighter.

Steering is crisp and direct, and the chassis vastly improved.

The Agila has undergone a total transformation.

The new Agila is a car people will want to own, rather than one that merely provides an anonymous mode of transport.

Stylish, practical, good to drive and economical,
it adds another string to Vauxhall’s bow.