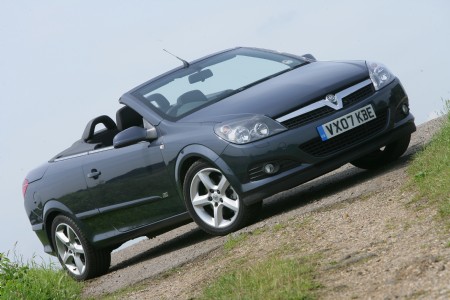 The arrival of our TwinTop coincided with probably the best weather April had ever seen.

I was looking forward to a scorching summer of top-down motoring in a coupé-cabriolet version of a hatchback for which I had considerable respect.

But the expected weather failed to materialise, and my experience with the Astra has been – well, mixed.

Let’s start with the good – the Astra really looks the part.

The designers have avoided the big-bum syndrome that afflicts so many folding hard-tops, and it looks good both with roof up or down.

The 150bhp engine has plenty of torque to whoosh you along effortlessly. It’s comfortable inside too, with front seats that provide plenty of support on twisty back roads and easily cater for long-distance cruising (there’s not much room in the back, though).

Everyone here raved about the fuel economy – the Astra regularly returned well over 40mpg.

On the road, several colleagues praised the Astra for its
undramatic approach.

“You almost didn’t notice you were driving it, it virtually drove itself,” said our head of publishing (rather worryingly).

But others felt a bit more involvement would have been nice.

Comments included: “I really liked it until I drove the Mazda MX-5 – compared to that, it felt a bit wallowy.”

I, too, would have preferred more feedback from the steering and tautness in the chassis, but the slightly more relaxed ride was a blessing on the motorway.

The main problems blighting our ownership of the Astra have been electrical gremlins and dealer service.

The electric folding roof has the occasional moment of stubbornness when it stops working halfway through its mechanical ballet.

The only way to sort it out is to restart the car. The Astra also kept insisting that the coolant level needs topping up, even though it doesn’t.

On both occasions it went into our local dealer, which could not find any fault.

Unfortunately, our car was subject to some vandalism and the repairs were unsatisfactory – a wing mirror casing was refitted badly and a badge which had fallen off was misaligned when re-attached.

There were also instances of mis-information from the dealership when it came to specific TwinTop issues (not every dealer can work on the folding roof mechanism).

However, the TwinTop is a very good car, both to own and to drive. Hopefully, our experiences of dealer service are isolated incidents.