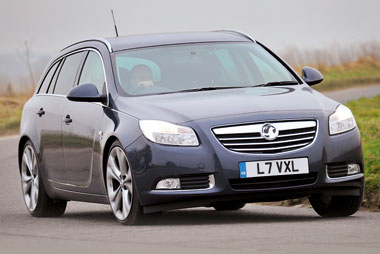 Vauxhall’s Insignia continues to be the vital element in the carmaker’s ongoing battle to remain high on fleet choice lists.

The estate version completed the line-up and has proved popular. Some 15% of all Insignia sales are in the Sports Tourer body.

Steve Catlin, Vauxhall’s fleet marketing and Motability manager, said: “The Sports Tourer launch has given Vauxhall even more ability to compete for the affections of the critical user-chooser market.”

So, there were high expectations when the mid-range £25,390 Insignia 2.0 CDTi SE Sports Tourer arrived.

Practicality is high, with interior space for passengers and luggage more accommodating than some competitors’ estate.

There is a 540-litre load area with the rear seats up, while dropping the 60:40 split rear seats creates 1,530 litres of luggage space.

But loading baggage into the car revealed some poor quality fittings.

The latch used to lift the boot floor came away completely leaving a fist- sized hole where the handle was.

Standard equipment is impressive in the SE trim.

The power tailgate is particularly impressive.

The factory-fitted satellite navigation, however, wasn’t. Simple to use and follow, it was erratic in its ETAs. Over two three-hour journeys it over-estimated times by more than 30%.

The 2.0-litre 160bhp diesel engine on test (there is also a 130bhp version) is well capable, proving to be a relaxed cruiser and responsive accelerator.

CO2 emissions sit at 159g/km for both diesel options which put them just under the critical 160g/km corporate tax benchmark.

Company drivers should consider the Ecoflex Insignia Sports Tourer, which has emissions of 139g/km from the same 160bhp diesel engine which takes the car down four BIK tax bands to 18%.

The Ecoflex also has improved fuel consumption, claiming 53.7mpg compared to 47.1mpg for the regular model.

The test Insignia returned exactly the manufacturer’s 47mpg figure over the week-long test, which was mainly motorway driving.

But company car drivers who are forced to claim using the Government’s advisory fuel rates will still find themselves struggling to cover the cost of their business journeys in the standard car, which makes the argument for the Ecoflex all the more convincing.

The Insignia is available in a lower-CO2 EcoFlex version and that would appear to be more competitive for BIK tax with its rivals than this standard 2.0 CDTi 160 model.

Recent changes to the Ford Mondeo and Mazda6 have made significant improvements to fuel consumption, resulting in them showing this non-EcoFlex Insignia at a disadvantage.

Hampered by fuel consumption relative to these rivals the Insignia falls short. However, the EcoFlex version would offer a far stronger showing on overall running costs.

Some might suggest it’s unfair to compare this version of the Insignia against these rivals given the presence of a low-CO2 EcoFlex in the range.

However, the other cars here are in their standard form and perform significantly better for duel consumption and CO2 emissions. But it’s the Mazda6 that stands out as best value.