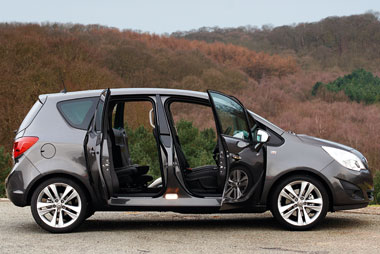 For practical cars, being merely practical is no longer enough.

As many cars no longer fit neatly into traditional sectors, customers expect a degree of multi-tasking.

Vauxhall seems to have been acutely aware of this when designing the new Meriva.

The original car, introduced in 2003, offered a vehicle that took up hardly any more road space than a Corsa, but with much more interior space and a few clever touches.

But it could hardly have been described as stylish.

The second-generation Meriva arrives in the UK in June and comes with a sophisticated look, inspired by the Insignia and Astra.

Substantially larger than the car it replaces, the new Meriva is less than a couple of inches shorter than the original Vauxhall Zafira.

It’s closer in size to cars like the Ford C-Max, Renault Scenic and Citroën C4 Picasso, and has a few innovative features that make it stand out from the crowd.

The main one is the rear-hinged rear passenger doors – not offered on any other car of this type.

On the Meriva they open to almost 90 degrees, making getting in and out of the rear passenger compartment very easy.

They are also more convenient for fitting child seats.

The interior has been designed to accommodate items that typically need to be carried in a small family car, while medium specification versions come with a ‘FlexRail’ console running between the front seats to the rear compartment with a sliding storage tray.

The interior will seat four adults in comfort and the rear compartment has also been designed with extra depth in the windows to give occupants a better view of the road, while range-topping SE versions come with a standard panoramic glass roof.

The rear seats can be folded flat to increase potential luggage volume, or can be moved rearward and inward to increase leg-room for rear-seat passengers.

In the front, the A-pillars have been made narrower to improve visibility, and the front doors have been designed so as to eliminate the need for extra fixed quarter windows as in the original Meriva.

Contrasting colour combinations for the dashboard and door trims can also be chosen to give the interior a more upmarket feel, while many of the switches and controls, as well as the steering wheel, are similar to those in the Insignia.

At launch, there will be a range of 1.4-litre petrol engines – a normally-aspirated 100bhp version at the entry level, with a choice of 120bhp and 140bhp turbo-charged units.

Two diesels will be available at launch – a 75bhp 1.3-litre and a 100bhp 1.7-litre, the latter coming with a six-speed automatic gearbox.

A 95bhp low-CO2 Ecoflex version as well as a 130bhp 1.7 CDTi will follow a few weeks after the Meriva’s launch in June, the former likely to have CO2 emissions below 120g/km.

There is a simplified equipment grade structure which reflects those available on the Astra and Insignia.

Expression is the entry-level version, with S and Exclusiv as mid-spec models and SE as the top of the range.

Air conditioning is standard on Exclusiv, while alloy wheels are fitted to SE. Prices start at £15,495 OTR.

The Meriva impresses with its quality feel and thoughtful features, while there is a dash of style to add to the feel-good factor.

It is far more desirable than the model it replaces.

To book a test drive with the latest Vauxhall Meriva model, reserve your place at the Greener Company Car In Action today, for more information visit