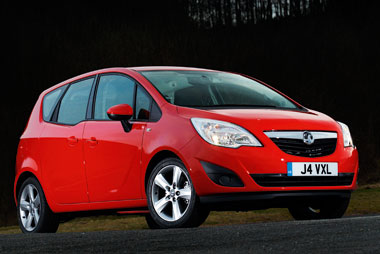 According to Vauxhall, its Ecoflex diesels have been the best-selling low-CO2 range in the UK.

Given the manufacturer’s position in the fleet market and the broad range of Ecoflex models (more of them than Ford’s Econetic, or Volkswagen’s Bluemotion variants, for example), it probably isn’t as outlandish a claim as it might first seem.

Latest in line is the Meriva Ecoflex, which uses a 95bhp 1.3-litre diesel, and takes the versatile new model with its rear-hinged passenger doors (given the name FlexDoors by Vauxhall) under the 120g/km barrier.

It achieves this by using a cleverer turbo than other diesel models as well as some taller gear ratios.

This, along with the more generous dimensions of the current Meriva, put it on a par with the lowest CO2 version of the latest Ford C-Max and the Seat Altea Ecomotive.

Those rear doors are what makes the Meriva stand out, though, and there’s something to be said for the way they allow easier access to the rear, although the Ford C-Max’s sliding passenger doors are yet another alternative to convention.

The Meriva’s performance feels adequate, although with taller gear ratios in the higher gears, drivers will have to get used to changing up perhaps a little later than they are used to.

And its broad A-pillars hamper forward visibility when approaching roundabouts and junctions, although it is not alone in having these characteristics.

It’s a pleasant enough drive overall, though, and there are plenty of features inside that make it easy to cope with using it as family transport during private mileage.

The FlexRail (available on some versions) is a movable storage area that can slide between the front and rear of the car on rails.

Rear seat flexibility is also improved over the previous Meriva with a folding mechanism that’s much easier to use.

Excellent versatility and a choice of ultra-low CO2 versions should put the Meriva on any shopping list for fleets offering compact people carriers.