THE hot people-carrier. It’s an incongruous but distinctly appealing concept that Vauxhall debuted with the old Zafira GSi. And the arrival of the new muscle-bound VXR brand means this new range-topping Zafira will makes things even more incongruous. And more fun.

As a niche product and a steep £21,995 – steep for a family people-carrier, that is, but Vauxhall expect to only sell around 750 next year, with well-heeled user-choosers absorbing half of those.

Vauxhall is adamant that the Zafira’s VXR transformation from mild-mannered MPV to snorting GTI baiter is crucial for the VXR brand as a whole.

Vauxhall’s fleet brand manager Paul Adler said: ‘There has to be VXR excitement in pretty much all our model ranges. And the Zafira is no exception.

‘Just because you drive a people carrier doesn’t mean you shouldn’t have fun behind the wheel.’ And Adler is also confident that the Zafira VXR’s relative exclusivity will shore up residuals – an assurance borne out by the strong values of the old Zafira GSi.

Vauxhall’s idea of fun is getting its go-fast engineers to squeeze the muscular 2.0-litre turbo engine from the Astra VXR under the Zafira’s stubby bonnet.

It returns a respectable 29.4mpg on the combined cycle and a emits 230g/km of CO2. Underneath the skin the fast Zafira has undergone an extensive dynamic makeover – bigger brakes, lowered and stiffened suspension and Vauxhall’s sophisticated IDS2-Plus system as found on the Vectra VXR.

And when the Zafira VXR looms fast in your rear-view mirror – as it will invariably do – you won’t mistake it for anything else.

Its lantern-jawed front end is complemented by a chunky bodykit, beautiful 18-inch alloy wheels, huge twin exhaust pipes and tail spoiler. Think of a low-flying bank safe and you’ll get the idea.

Some potential buyers might find its looks a bit heavy-handed and ostentatious, but there will be many – us included – that can’t help but grin at its cheeky ‘let’s-have-it’ styling.

Cool. Only some tasteless pretend carbonfibre inserts in the cabin spoil the look.

The rest is standard Zafira – with its effective, clever Flex7 seating arrangement, it’s probably the most intelligently-configured people carrier on the market.

And with a long standard specification list that includes air-conditioning, a top-drawer audio system, six airbags and that all-encompassing safety package, VXR drivers will want for nothing.

A hot people carrier powered by a 237bhp turbocharged engine and riding on stiffened and lowered suspension sounds like a recipe for disaster, but the Zafira VXR makes for a surprisingly engaging and desirable package – arguably more so than the disappointingly unruly Vectra VXR. As you’d expect, it’s very quick – Vauxhall claims a 0-62mph time of 7.2 seconds and a top speed of 144mph. That’s barely slower than a Golf GTI.

Despite its people-carrying roots, the Zafira rides and handles with a flair and dynamism that’s entertaining and unexpected. It has an appealing tail-up attitude that makes it difficult to resist driving hard and fast most of the time.

It peels aggressively into corners with none of the roll you might expect and simply devours straights.

The steering has a pleasing feel to it, the clutch has plenty of bite and the gearlever has a quick action through the gate. 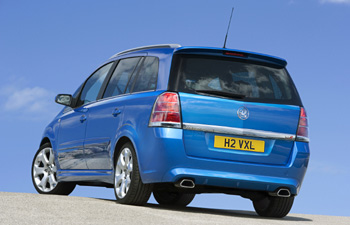 The brakes also deserve praise. No matter how hard or often you lean on them they provide effortless stopping power.

But it is the engine that dominates the driving experience – smooth through the mid-range and revving with a crisp red-line crackle it delivers an effortless and addictive surge of acceleration with the slightest squeeze of the throttle.

And yet it’s refined and flexible enough to make the daily commute a painless exercise. The VXR is wild when you want it to be but is also happy to trundle about unobtrusively.

On smooth open motorways, the hot Zafira makes for an effortless high-velocity cruiser. It will dispatch a long and potentially wearying family trip with ease. Nor can the surprise factor – the ability to relegate hot hatches and sports car to rear-view mirror specks – be ignored.

It’s not perfect – putting all that power through the front wheels is always going to create problems. Get on the throttle too soon and the front wheels can scrabble around as they try and handle all that torque, and brisk acceleration over uneven road surfaces will have the steering wheel writhing around in your hands.

Yes, the ride is firm but there’s still enough well-damped compliancy to sponge away most intrusions, and with more people aboard the ride quality improves further.

As we found with the Vectra VXR, activating the Sport button is a largely pointless exercise – the ride becomes brittle and the throttle pedal turns into an all-or-nothing switch.

Marrying the excellent versatility of the Zafira’s Flex7 seating arrangement with a red-hot engine has created a truly appealing package. It’s expensive, not particularly cheap to run and visually a bit loud for most, but if you are looking for something a bit different, it’s an absolute winner. 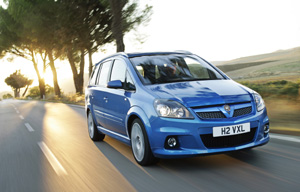