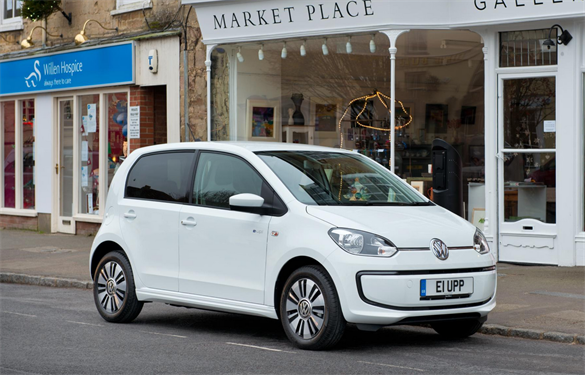 At first glance, you probably wouldn’t notice the new Volkswagen E-Up. The firm’s electric debut is discreet, with only a few blue decals alluding to its EV powertrain.

That’s because, unlike ground-up EVs, the bodyshell is based on the standard five-door car. This means the vehicle uses the excellent dash and interior from the High Up trim, along with extras such as a heated windscreen, DAB radio, and rear parking sensors.

The conversion to electric has been kind, losing only one litre of boot space, and 28 litres from total space with the rear seats down.  There is a weight increase of 199kg, although an 82hp electric motor replaces the 60hp petrol engine.

Using a fast charge facility, the E-Up reaches 80% capacity in 30 minutes, meaning longer journeys aren’t out of the question.

It’s worth noting the higher the speed, the faster the range depletes. Our test drive included around 15 miles of dual carriageways at the national speed limit, knocking 30 miles off the available range. The E-Up’s speedo shows a ‘blue range’, which at 30-50mph provides optimum efficiency.

In ‘B’ mode, the regenerative braking is to such an extent the vehicle can slow to a standstill without applying the brake. It’s a strange sensation to begin with, but in a stop-start environment, quickly becomes second nature.

Volkswagen has modest UK expectations for the E-Up’s first year, expecting to sell around 250 vehicles through a network of 24 dedicated EV retailers. The main setback for this £19,250 vehicle is the £8,000 price premium over the highest specification petrol vehicle.

If the German giant’s first EV is anything to go by, the other electric and hybrid vehicles due across the Volkswagen Group this year will be very promising indeed.