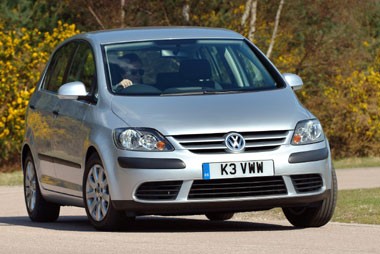 The Volkswagen Golf Plus – it’s a Golf, but bigger. Yes, we all know about the Golf Plus – this review is all about a specific part of it.

The German carmaker has, for the past five years, been pushing its DSG technology.

This little box of cogs and tricks has revolutionised the automatic gearbox world.

Where traditional automatics have a detrimental effect on economy and emissions compared to manual gearboxes, the DSG system improves them.

For those unfamiliar with the concept, DSG works by using two clutches instead of one.

The first clutch deals with odd-numbered gears and the second handles even-numbered ratios and. While a gear is selected, the other clutch engages the next gear so that when the driver shifts up or down, the change is lightning quick – a few hundredths of a second.

Volkswagen has had a six-speed DSG ’box available for some time, and this has been used on high-end cars such as the Golf R32 and diesels with plenty of torque.

But now a seven-speed version has been introduced, which is aimed at less powerful cars.

The new gearbox will be initially introduced on Golfs using the 120bhp TSI petrol engine and the 104bhp TDI diesel.

On the 1.4 TSI-powered Golf Plus we tested, the savings in fuel and emissions are impressive.

However, the DSG gearbox commands a £1,400 price premium over its manual cousin.

Perhaps the best thing that can be said about an automatic gearbox is that it is unnoticeable.

If I drive an automatic, I want it to change gear without me knowing.

Volkswagen’s original six-speed DSG gearbox was excellent, although in higher-powered cars couldn’t quite compare to the involvement of a manual transmission.

For that reason, the new gearbox’s place in lower-powered cars makes more sense – that involvement is perhaps not as important to their drivers, so something that makes ordinary transport easier seems a perfect idea.

And the new seven-speed ’box does just that. In the Golf Plus it felt slightly jerky when cold, but when warm was quick and smooth in both upshifts and downshifts.

It also kicked down beautifully when accelerating hard, and responded well when the gearstick was used to change gear manually.

The latest DSG semi-automatic gearbox makes the most sense in cars with less power.

Unless you’re a die-hard fan of manual transmissions it’s hard to see a reason not to go for it, especially with the gains in fuel economy and lower emissions that it offer.