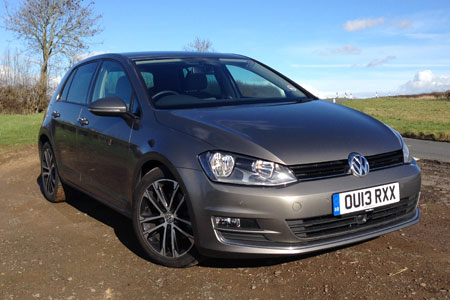 I’m not sure whether it’s a direct result of the reduced weight in the seventh-generation Golf, or the fact that I don’t test many cars with petrol engines, but the performance of our 1.4 TSI GT is surprising.

I can’t remember the last time I had a petrol car on long-term test. It might well have been longer than a decade ago. And while I’ve driven many petrol cars in the interim, they weren’t really on a day-to-day basis.

So our 140hp Golf is fitted with a turbo-charged 1.4-litre engine, but perhaps the more important figure is a whopping 184lb-ft of torque at a mere 1,500rpm.

Combined with the seven-speed DSG transmission, which has two clutches and preselects the next gear depending on whether you’re speeding up or slowing down for an instantaneous shift, and paddle gear selectors on the steering wheel, it’s almost impossible not to find the engine’s sweet spot for effortless acceleration when required.

With all that performance readily available it would perhaps be easy to exploit it, but my commute involves heavy traffic and most of the mileage is on 60mph or 70mph roads.

Throw in a few miles of congestion and the car barely matches the official urban fuel consumption figure of 48.7mpg. The silver lining on this cloud is that this figure is remarkably close to the diesel-powered Mazda3’s worst days on this route, which sometimes struggled to hit 50mpg.

The Golf does strengthen the case for reconsidering petrol cars, particularly for lower mileage drivers. Out on the open road, we have seen the Golf nudge 52mpg, which is a little way short of the 60.1mpg achieved in the official tests, but in my view quite acceptable for a petrol-fuelled family car with an automatic transmission.