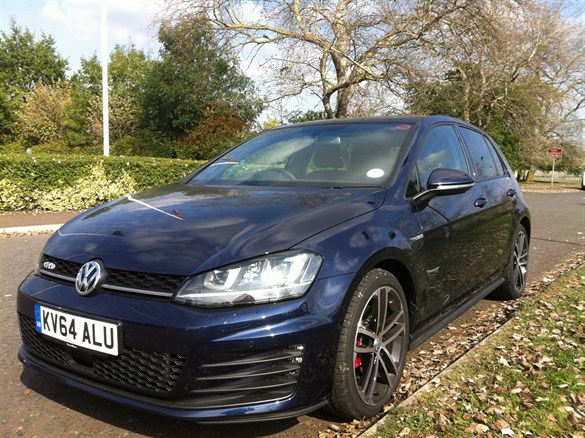 The GTD’s road manners reflect its sporty appearance, too: the ride is stiff but compliant, and the steering sharp, while it corners with little body roll.

Its 2.0-litre engine produces 184hp, enough to give it a claimed 0-62mph time of 7.5 seconds and plenty of power for overtaking – as well as a satisfyingly sporty exhaust note.

Our Golf is fitted with the optional £255 Sport & Sound kit which, at the press of a button, accentuates the exhaust note further to give it a real growl. This, however, will be an acquired taste. It appeals to the boy-racer in me, but will be too intrusive and ‘look at me’ for many drivers.

In short, there’s plenty to appeal to the keen driver. However, the GTD also appeals to the older, more patient and efficiency-minded driver I’ve become. It has an official combined fuel economy of 67.3mpg and CO2 emissions of 109g/km, putting it in the 17% benefit-in-kind tax band with an annual VED bill of £20.

Our Golf can also be a relaxing car to drive on main roads. As mentioned earlier, it is a compliant ride and, when the Sport & Sound option is deactivated, is refined with low levels of exterior noise.

Using the standard adaptive cruise control allows the driver to set a maximum speed and a radar maintains a steady gap before the vehicle in front, both slowing down  and accelerating to the maximum speed specified. City emergency braking is also standard, so the Golf is able to stop itself if it detects a collision is about to happen.