EVERYTHING seems to be getting a sexy makeover. Even things which have been perennially dour like Government dossiers, Birmingham city centre and the Passat estate have been given an invigorating wash and brush up recently.

The new Passat estate has taken over from a model that was the motoring equivalent of a hessian sack. It was fantastically useful and durable, but it didn’t set drivers’ hearts alight.

The new one is an entirely different proposition and proves that a volume upper-medium car can be desirable.

‘Lifestyle’ estates are quite the thing around the shires, as an antidote to blobby but functional mini-MPVs, although the more desirable ones, such as Audi’s A4 Avant, the BMW 3-series Touring and Saab’s 9-3 SportWagon, are at the premium end of the scale.

The Passat is pitched to bridge the gap between premium and volume – as the Golf does so well a sector down – and it’s an approach evident from the first time you make contact with the car.

The estate retains those thickset sides, deep door pillars and bluff chrome nose that give the Passat a look of dependable solidity, but whereas the old model’s boot looked as though it was designed to hold the biggest, squarest box it could, this one is altogether more voluptuous. 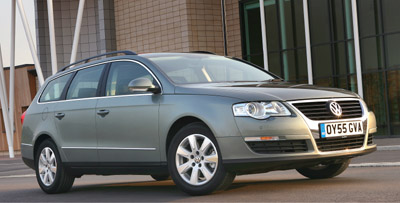 The rear lights are pure class – shapely but beefy, with beautiful detail.

Along with the curved rear screen, deep bumpers and chrome strips, the effect is of quality and style. And it is a theme that continues on the inside.

We’ve already waxed lyrical about the new Passat’s lighter, more chic cabin, and the estate is no different. Even the thick velour upholstery has a superior feel to it that doesn’t make you miss leather so much, although some of the plastics lower down in the cabin smack of cost-cutting. But in the areas that really matter, the Passat has a very good finish.

And although quality and image are possibly more important in a lifestyle estate than boot space, the Passat is not too embarrassed in this regard either. Its total of just over 1,600 litres with the rear seats down does not compare to the Vectra’s cavernous 1,850, but it is no doubt more than enough for many drivers.

The square-edged sides give decent load carrying ability and the rear seats fold down with an easy motion exactly as in the previous model.

The 138bhp 2.0-litre TDI SE we have chosen here is right at the heart of the range. As a drive, the 2.0-litre unit is fine. While it is not mind-blowingly fast (at 1,715kg the Passat is weighs 150kg more than an equivalent Vectra), there is enough performance for most, and it is quiet and refined.

The new estate also handles decently. It’s not the sort of car to be hanging on for dear life in round corners, but it’s much less of a big old bus than the last one, and doesn’t feel a great deal less nimble than the saloon, despite its extra 76kg.

All these characteristics add up to a very fine car that really stands out as a quality product at its price, and proves that while many doom-mongers have predicted the continuing demise of the upper-medium car, done really well, there is life in the segment yet. 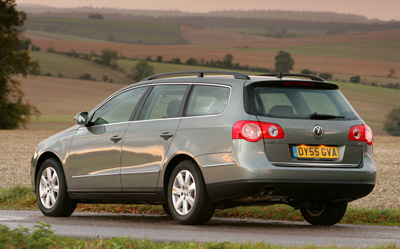 The mk8 VW Golf offers the broadest model line-up and the strongest residuals.