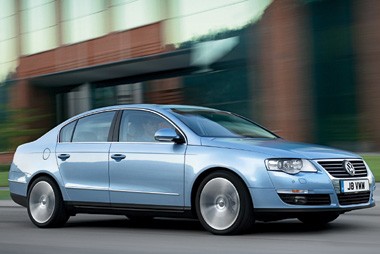 A frenzy of launch activity in the upper-medium sector in the past year has resulted in far more choice in a market which was, until recently, fairly staid.

But with all-new metal to tempt drivers on choice lists, the established players with no new products have had to think laterally to keep interest in their products.

The Passat is no spring chicken in this company, so the extra equipment levels are welcome.

The most notable additions are full leather upholstery with heated front seats, a multi-function steering wheel and a set of handsome 17-inch alloy wheels.

The Highline package is completed by a set of floor mats (ooh!).
This list builds on what was standard on the superseded SE trim – air conditioning, eight-speaker stereo, cruise control and chrome window surrounds.

All of this extra equipment would cost in the region of £2,000 from the options list, but the Highline costs just £250 more than the SE model.

It sounds like a very good deal and when combined with the fitment of the latest Volkswagen Group diesel engine, it certainly stacks up.

The new engine is a common rail unit, still delivering 140bhp but this engine is far more refined than before.

There’s much less clatter at start-up and idle, and when on the move it remains subdued.

In performance terms this engine feels little removed from the old one, so there’s plenty of power available from low down in the rev range.

The gearbox is fine, lacking the precision feel of the Honda Accord’s but nowhere near as mushy as a Peugeot’s box.

And the handling edges on just the right side of sporty, with the 17-inch wheels giving the Passat a planted feel on the road and a flat cornering stance.

On main roads the ride comfort is good, although venture on to less well-surfaced back roads and the ride becomes quite jarring.

The interior will be familar to anyone who has sat behind the wheel of a Volkswagen Group product, with efficiency and logic the key words – there’s little in the way of flair and some of the plastics below eye level looks a bit cheap, but the overall impression is one of solidity and quality.

And with the extra equipment – notably leather, heated seats, cruise control and multi-function steering wheel – the Passat becomes a pleasant environment in which to rack up the miles.

Perhaps the only thing you would want is a hatchback model to boost usability in the rear, but even as a saloon it’s been doing fairly well for itself against the competition.

The Passat comes in second behind the Mondeo, but it is by far the best value car here, offering leather seats, 17-inch alloy wheels and a 140bhp diesel engine for just £300 more. The Accord’s price reflects Honda’s premium aspirations to move the car upmarket.

The Passat’s new common rail diesel engine may not be the cleanest here, but the Highline’s low P11D price means it is the cheapest in benefit-in-kind tax terms, costing a 20% taxpayer £67 a month.

The rest are closely matched, with the Volkswagen’s variable intervals and 17-inch alloys beating the Ford Mondeo on 16-inch wheels and a 12,500-mile service schedule.

The rest are closely matched, with the Volkswagen’s variable intervals and 17-inch alloys beating the Ford Mondeo on 16-inch wheels and a 12,500-mile service schedule.

CAP estimates that the Passat and Accord will retain 39% of their cost new after three years and 60,000 miles, but the Volkswagen’s lower front-end price means less cash lost.

The Citroen records an impressive 36% and the Mondeo has fallen to a lowly 29%.

Although the Honda takes the lead in most of the running cost sections, the Passat claws back this advantage by being easily the best in terms of depreciation.

It undercuts the Accord by roughly £500 over a typical three-year/60,000-mile fleet lifecycle.

The three challengers to the Passat are all relatively new to the market, and each brings certain qualities – the Honda Accord’s exceptionally refined engine, the Ford Mondeo’s huge interior space and the Citroën C5’s attractive styling.

While all three are good cars, as a package none of them can match the Passat in Highline trim.

The Volkswagen may be the oldest car here by some margin, but by adding in some desirable equipment and a new diesel engine, the Passat retains its position at the top of the upper-medium tree.