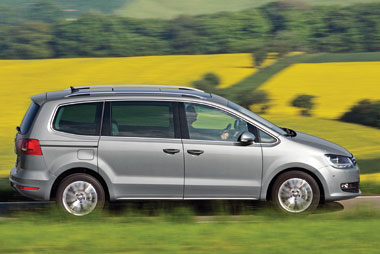 It’s hard to believe that the current Volkswagen Sharan has been with us for 15 years.

It has undergone three major updates, but is essentially the same car that arrived in 1995.

The latest Sharan, due in November, looks a far more capable vehicle.

It is nine inches (22cm) longer and comes with sliding rear passenger doors.

Most of the extra space has been used for greater leg-room in the third row.

The current model required removal of the second and third rows of seats for extra luggage space.

The latest model has fold-flat seats. It’s even possible to fold the front passenger seat for very long items.

The two outer seats in the middle row can be ordered with integrated child seats suitable for children aged three and above.

The entry-level Sharan comes with a 1.4-litre petrol engine, which sounds small for a large vehicle, but it’s turbocharged and supercharged, enabling it to produce 150bhp.

All of these engines use Volkswagen’s stop-start technology and energy recuperation, which help cut CO2 emissions and reduce fuel consumption.

At the top of the range is a 200bhp 2.0-litre turbocharged engine, which has no fuel-saving technology and comes with a DSG as the only transmission.

The 140bhp diesel achieves 51.4mpg on the combined cycle – significantly better than an equivalent Ford Galaxy or Renault Espace. DSG-equipped versions also have stop-start technology, making the Sharan DSG the most efficient automatic in its class.

UK versions will be available in S, SE, SEL and Executive grades.

Executive models are based on SEL, but come as six-seaters, with two individual middle row seats rather than three and full leather seat trim.

The middle seats are removable.

The Sharan feels sharper than its appearance suggests. Engine noise is muted and performance feels strong.

Its party trick is the latest version of Volkswagen’s optional parking assist technology.

As well as reversing the car into a parking space, it can also drive out of an even tighter space.

As larger people carriers were losing out to compact seven-seaters, new models like the Volkswagen Sharan have hit back, with genuine practicality and low running costs making acompelling case.