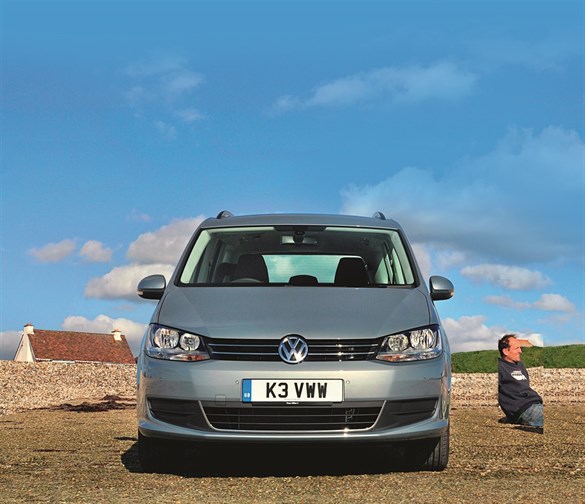 A year ago, you’d have been forgiven for thinking the large people carrier segment in the UK was populated almost exclusively by dinosaurs.

The Ford Galaxy was new in 2006, but the other big players in the sector felt rather familiar.

The Renault Espace has been around since 2003, and while the Volkswagen Sharan and Seat Alhambra had undergone updates over the years the vehicles were launched in 1995.

The Sharan arrived in autumn 2010 and (with Seat) from launch offered class leading fuel economy and low-CO2 emissions.

With CO2 from 146g/km and fuel consumption of 51.4mpg on the combined cycle, the benefits of technology that had made its debut in Volkswagen’s frugal Bluemotion models would be clear on such a large vehicle.

And the Sharan is large. It is 220mm longer than the model it replaces, as well wider, but it isn’t quite as tall. It offers improved practicality, with features such as sliding rear passenger doors.

And when you need more carrying space in favour of passenger room, rather than lugging the removable seats out and finding somewhere to store them, on the Sharan they fold easily and neatly into the floor.

We tested the 140bhp 2.0 TDI, which will be the favourite engine with fleets and in high-spec SEL grade – the highest available with seven seats.

All diesel versions of the Sharan are badged Blue-motion Technology as they all feature stop-start and energy regeneration, which allows such impressive fuel economy and CO2 figures.

It has more than enough performance for the Sharan to feel comfortable on the road, with good overtaking ability and smooth performance.

It is amazingly quiet on the move with top-notch engine refinement, while it feels far more composed than a car this size should.

The Sharan feels upmarket, but more importantly feels like a modern car, and will go some way to ensure the large people carrier doesn’t become extinct.