SUBTLE styling revisions and some significant technical upgrades have brought the Touareg up to date and will doubtless help it maintain claims for record market share of more than 10%, or 4,173 units, in 2006.

Latest models now come with a new grille as part of a reworked front end that includes redesigned headlights. At the rear, there are also new lights, tailpipes and a restyled bumper, while under the skin the adoption of the ABSplus braking system claims to reduce braking distances by up to 20% on broken surfaces. 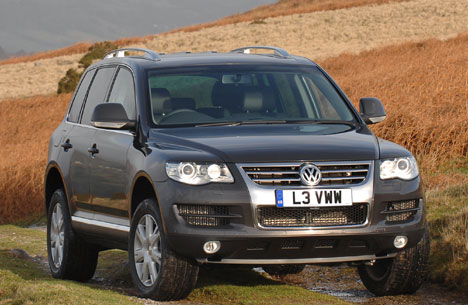 Inside, redesigned rear seats liberate more passenger space and the new Touareg is well-equipped, with SE models and above fitted as standard with leather trim and DVD satellite navigation.

New features are also added to the ESP, including Rain Brake Support, Fading Brake Support and Understeer Control Logic, which improves turn-in in the event of understeer. Models fitted with factory towing equipment also benefit from a trailer stabilisation function as standard.

THE 3.0 TDI SE Tiptronic model I tried was fitted with optional air suspension at £2,495, a price which also includes Xenon headlights. It offers a choice of three suspension settings – Comfort, Sport and Auto, the latter scrolling between the two automatically depending on speed.

Setting off in Sport mode revealed a truly bone-jarring low-speed ride that had me reaching for the Comfort setting sharpish.

Once in Comfort mode, things were noticeably smoother, so much so that I can’t really see the point of offering the Sport setting – perhaps only on a German autobahn where the lower ride height and shorter travel would keep things steady at high speed.

The Touareg is a big, cumbersome vehicle that scarcely lends itself to being thrown around on your favourite country road. Doing so merely exacerbates the lack of feel through the power steering and so-so handling, and would doubtless wreck the disappointing 26.9mpg claimed combined economy figure. In fact, the Touareg is at its best at moderate speeds, and seems to engender this style of driving, where the engine’s great refinement and smooth-shifting transmission come into their own.

While there’s little wrong with the quality and execution of the interior, the design, with its old-fashioned T-handle gearshift and squared off detailing, seems a little dated.

ONE can’t help feeling the Volkswagen brand is at odds with a big SUV like the Touareg, with prices starting at £30k and extending far north of that. That said, the 3.0 TDI SE tested is well-equipped and refined. Overall, though, it’s a lack of image and character that lets it down in a fashion-conscious sector populated by the likes of the BMW X5.

The VW Polo is a small car that does a very good job of pretending to be something much bigger.