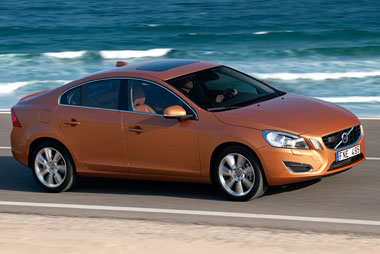 Safety is probably one of the first words that come to mind when you think of Volvo, but sporty is unlikely to be high on the list.

Although the original S60 had a coupé-like profile, it was a bit of a let-down on the road, never feeling as sharp as the looks suggested.

The latest S60, on sale this summer, has been engineered to provide an engaging drive that should be the equal of its sweeping design.

As well as new engines, the S60 range comes with new safety features, including a world-first system that can bring the car to a stop to avoid hitting a pedestrian.

The first examples of the S60 will come with a new 163bhp 2.0-litre five-cylinder diesel in the D3, as well as the latest version of Volvo’s D5 with 205bhp.

Despite the 2.0-litre diesel’s five-cylinder layout, its fuel con-sumption of 53.3mpg and emissions of 139g/km, are competitive with many 2.0-litre four-cylinder diesel engines.

The majority of S60 sales will be to the corporate market, and Volvo expects full year sales of 9,700 in the UK in 2011.

It will also launch a V60 estate later this year.

Equipment grades start with ES (prices starting at £23,295 for the D3), with SE as the medium specification line, and SE Premium at the top.

All come with City Safety as standard, which can brake the car to a standstill at low speeds if there’s a risk of colliding with the vehicle in front.

In an optional Driver Assistance package there is a pedestrian detection system.

A combination of a sophisticated camera and lasers detect the shape of someone walking in the road and first alert the driver, then if no action is taken, apply the brakes to attempt to stop the car before hitting the person in the road.

This technology is part of the company’s ambitious aim to have no fatalities or serious injury accidents in a new Volvo by 2010.

But Volvo also wants people to choose the S60 for its driver appeal.

The S60 is far more involving than its predecessor with heavier, more responsive steering, and although the ride is firmer than before, body control is improved and it feels far more composed on the road.

While earlier versions of Volvo’s five-cylinder diesels couldn’t compete with rival engines for refinement, the D3 and D5, in particular, are far more competitive.

Comparing with premium-badge rivals, the S60 is the second-longest car in the class (behind the Audi A4), and is far more generous with interior space than the old S60.

Quality of materials is improved and the S60 feels every bit a premium car inside – Volvo claims it’s the best ever fit and finish for the firm.

The S60 is a far more desirable package than its predecessors, with a good degree of driver appeal on top of the safety features and stand-out styling.

It also seems good value, and is likely to win sales at the top end of the mainstream upper-medium sector.