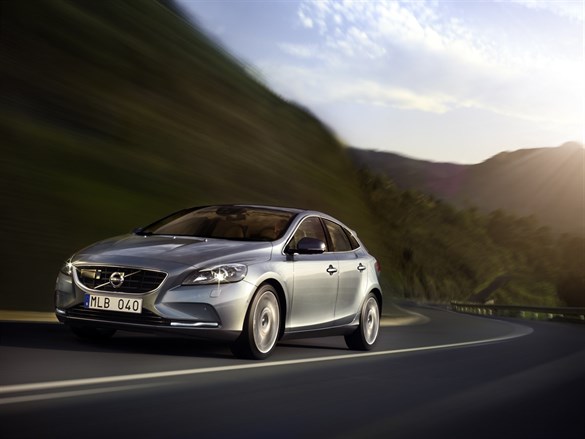 Style and substance come together on the new V40 as Volvo combines the best of safety with a chic design.

Safety has always been one of Volvo’s lynchpins and the V40 has taken this to an all-new level after achieving the highest ever overall score in the Euro NCAP testing.

It has also seen its insurance rating reduced by two to three groups, depending on model, thanks to its Autonomous Emergency Braking system, City Safe. It works up to 31mph and automatically brakes the car if the driver fails to react in time when the vehicle in front slows down or stops.

We didn’t have cause to experience first-hand City Safe, which is standard fitment on all V40 models, but extensive testing by researchers at Thatcham have shown that the technology is so effective at preventing low speed accidents that it needs to be taken into consideration when deciding the insurance group.

Insurers have duly taken note, perhaps also persuaded by studies in America which show a crash frequency reduction of 27% in vehicles equipped with such systems.

The savings for fleets, both from paying lower insurance premiums and through a reduction in low speed accidents, will significantly lower total cost of ownership.

Unlike some Volvos of the past, safety does not come with a compromise over design: the V40 is a real looker.
Front, side-on and from the rear it is sharp, sporty and sleek – arguably the best looking model in a sector which includes the likes of the Audi A3 Sportback, BMW 1 Series and Volkswagen Golf. OK, in this company perhaps that’s not saying much, but it will provide competition to the forthcoming Mercedes-Benz A-Class.

The 1.6-litre D2 engine in our test car promises much and partially delivers. Power from the 115bhp block is good, although throttle response is poor at low revs. The official fuel figure is 78.5mpg; we comfortably achieved around 62mpg.

While that is 21% below, given more time with the car something approaching 78mpg would be achievable without sacrificing all driving enjoyment.

The firm ride encourages enthusiastic driving, although comfort is provided by the cushioning seats.

One negative was the extremely heavy boot: the struts need a bit of oiling to reduce the friction; either that or extended time with this car would certainly build up the arm muscles.

Volvo has a tough job on its hands. From above it faces the solid premium trio of 1 Series, A3 and forthcoming A-Class; from below it is tackling fleet favourites Golf and Focus.

The V40 has much to offer and running costs are competitive; as an alternative to the established order it makes a compelling case.