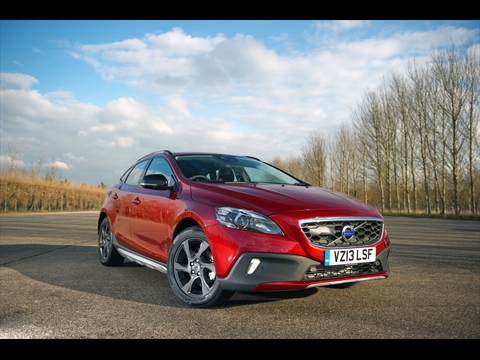 The crowded C-segment has traditionally been a struggle for Volvo. Until last year it had only a selection of misfits to compete with premium and high-end mainstream hatchbacks: the three-door C30, the S40 saloon and V50 estate.

But the situation changed with the launch of the V40 – the brand’s first ‘premium’ five-door hatchback.

For 2013, the V40 range has been extended to include the sporty R-Design and rugged Cross Country.

The Cross Country is design-led rather than having true off-roading ability.

Only the range-topping T5 turbo petrol is available with all-wheel drive, while the rest come with front-wheel drive.

Ride height has been increased by 40mm over the standard V40, roof rails and skid plates have been added, and the front bumper is fitted with a larger honeycomb grille.

No 94g/km variant of the D2 is available for the Cross Country so we tested the D2 99g/km.

The seats are extremely comfortable – one of Volvo’s trademarks – but unlike a mini-SUV, the seating position isn’t particularly raised.

Considering the extra body height there was no noticeable body roll into the corners and the Cross Country drives much like the standard V40.

As you would expect with Volvo, safety is a strength. The world’s first pedestrian airbag is standard. If sensors in the front bumper detect contact between the car and the pedestrian, the rear end of the bonnet (made of soft metal) pops up along with an airbag. It works at speeds of 12mph to 31mph.

Also standard is City Safety – Volvo’s Autonomous Emergency Braking (AEB) system – which now works at speeds of up to 31mph.

Volvo has moved away from having a specific eco badge and the entire V40 range features stop-start as standard, regenerative braking and low air/rolling resistance.