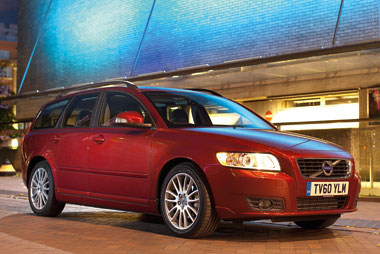 Everything used to be so much simpler with engine sizes.

Each size of engine usually had its own power output so in most cases it was easy to distinguish one from another.

But now it’s often the case that one engine will be offered in a choice of different power outputs – cheaper for manufacturers to cut back on the number of different capacity engines and manage power outputs with software or components bolted on.

Until this year most of Volvo’s range fell into the traditional engine naming strategy – 2.0D, 2.5T and so on.

There was an alpha-numeric name for the top petrol and diesel in most models – such as T5, T6 and D5.

But now Volvo has decided to use that style across all engines, which leads us nicely to the V50 D4 we test here.

It uses Volvo’s new 2.0-litre five-cylinder used in the S60 and V60 in a slightly lower state of tune. In those models it produces 163bhp, but here it has 177bhp and effectively replaces the old 2.4-litre D5.

Although it loses a handful of horsepower to the older engine, the CO2 story is far more dramatic.

Comparing the R-Design grade we had on test, despite the P11D price going up for the latest D4 version compared to the older D5, a 20% taxpayer’s annual bill would be cut by almost £230 for this financial year.

The R-Design is a popular equipment grade with UK drivers, like M Sport is for BMW and S Line for Audi.

It creates an uplift in residual values thanks to the styling kit and larger alloy wheels.

The V50 has been a popular car. It is an enjoyable car to drive.

Developed from the same basic platform as the 2004 Ford Focus and Mazda3 there is plenty on offer for driving enthusiasts.

Steering is pleasingly direct and the car feels composed on twisty roads.

Perhaps the only complaint is the trade-off in road noise and ride comfort from the 18-inch wheels fitted to R-Design models.

It’s possible to create a completely flat load area when folding the seats by lifting the rear seat bases and removing the rear head restraints.