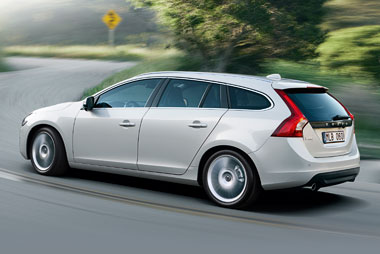 To most people, the new V60 – a ‘sports wagon’ version of the new S60 saloon – will be an estate, but Wailes said Volvo’s definition of an estate car was based on its ability to carry a washing machine with the rear seats in place.

The larger V70 certainly can, but the V60 cannot.

And although Volvo claims the V60 is the company’s most ‘dynamic’ five-door car produced to date, it also shies away from comparison with the sector driver’s choice, the 3 Series Touring.

Anyone familiar with the new S60 saloon will know it’s a comfortable, refined and high-quality upper-medium car.

There is no precedent for an estate version of the S60 before now, so the V60 is likely to attract user-choosers from across the sector – people seeing it as an upgrade from brands like Ford, Vauxhall, Peugeot and Citroën, as well as a few upsizing from Volvo’s own V50. And maybe one or two already driving a car with a posh badge.

While it might seem competitive with premium-badge rivals for space, anyone switching from mainstream brands will do so for reasons other than carrying capacity.

However, there is a dose of typical Volvo practicality.

The long-serving cargo area divider that keeps the weekly shopping, or other items, secure is here, and the rear seats fold in an easy action to create a completely flat load area.

Standard for all UK V60s is a fold-flat passenger seat, which extends the space considerably along one side of the car.

The V60 shares its range of engines with the S60, which means a new frugal five-cylinder 2.0-litre diesel in the D3 as well as the latest 205bhp D5.

One we hadn’t sampled before was the new T4 – a 180bhp turbocharged 1.6-litre petrol engine.

Using Ford’s EcoBoost cleaner petrol engine technology, Volvo expects CO2 emissions to be about 149g/km for the V60 with this engine and a manual gearbox.

This is mightily impressive for a powerful petrol.

However, Volvo thinks the diesel mix will reflect that of the S60 and take in excess of 80% of the 7,000 expected annual sales of V60.

Fleet sales will take about 70% of that volume, especially when a low-CO2 115bhp 1.6 DRIVe diesel arrives next summer.

Despite being described as dynamic by Volvo, the V60 doesn’t feel any sharper than its best estate rivals, but is still a decent drive.

The quality of the interior is impressive, with expensive-feeling materials and a simple and clear design.

We drove the D3 with the standard manual transmission, which felt a little cumbersome, while the Powershift auto we tried on the T4 was smooth, but slower to react than
the Volkswagen Group’s DSG transmission.

The V60 is a sleek and attractive practical family car for user-choosers who like the versatility of an estate without needing the carry-all abilities of some wagons.