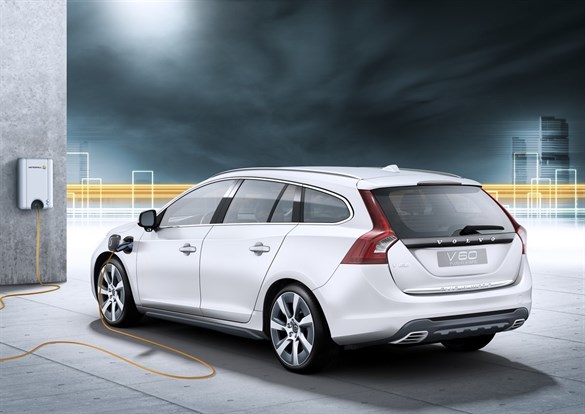 Volvo will be a relative latecomer to the burgeoning market when its next eco car reaches British showrooms in 2013.

But the fleet and corporate sectors are unlikely to be disappointed with the Swedish firm’s unique take on diesel-electric motoring.

Based on the familiar V60 sport wagon platform, the world’s first hybrid to blend diesel power with plug-in functionality is already shaping up as a proposition that’s as practical as it is sophisticated.

Although detailed work remains to be completed before production starts up in November next year, Volvo previewed its next green machine in Germany at the Michelin Challenge Bibendum event.

The firm allowed initial road testing of its next green machine to get underway and it soon became clear that this model will have strong appeal as a best-of-both-worlds transport solution.

Producing a combined output of 285bhp and 640Nm torque from its 2.4-litre turbodiesel engine and electric motor, the luxury hold-all adds full-bloodied high performance to the considerable list of advantages of electric and diesel travel.

Despite having stretching space for five adults and their luggage, the big Volvo zips to the benchmark 62mph rate with all the verve of a sports car and reaches 125mph all-out. Yet the fact that it is also able to haul a 1,800kg trailer load means it retains all the virtues of the standard estate.

“Our aim is to provide a car without compromise that is able to take its occupants over long distances in comfort with emissions and fuel consumption figures around half of what is available today. But as most European drivers cover less than 50km a day when they travel to and from work, this model will provide transport that costs just five hours’ charging time from a household electricity socket,” powertrain and platform strategy chief Karl-Johan Ekman told Fleet News.

While the five-cylinder engine powers the front wheels via a smooth six-speed auto transmission unit, the electric motor drives the V60’s rear axle. Three buttons offer the choice of electric, hybrid or the combination of full power from both sources and a central control unit manages torque distribution when all wheel drive is required.

Novel gadgetry also allows the driver to enter trip details in the car setup menu for the control system to work out the balance between diesel and electric power to ensure the best emissions figure for each journey.

How much will the car cost? “The cost of the battery pack means the price will be more than we charge for the standard car, but it is not decided yet. On the other hand, fuel costs should be one third compared with a conventional engine,” said Ekman.