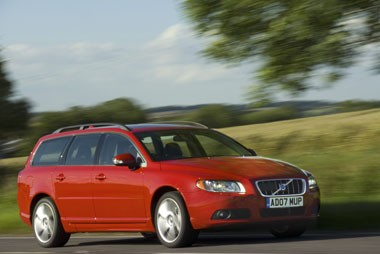 Not that I prejudge cars, you’ll understand, but I was already planning what I was going to write about the new entry-level Volvo V70 before the car even arrived.

Words such as ‘lethargic’ and ‘gutless’ were already penned in for the headline and opening paragraph.

And then the car arrived.

And then those preconceived thoughts went out of the window.

Because this V70 with its diminutive 2.0-litre diesel engine is undoubtedly the pick of the range.

It’s better than the 2.4D and D5 models, much cheaper than them too, yet still retains those V70 hallmarks of strong build quality, huge amounts of interior space and that legendary safety reputation.

By rights, the 2.0D’s 136bhp output and six-speed manual gearbox in the V70 should feel about as right as holding the Olympics in China, especially as big cars usually come with
automatic gearboxes and even more especially as the V70 weighs 1.7 tonnes.

But the package works really well, making it not only a refined car but also one which is more enjoyable to drive than a 2.4D
or D5 V70 with automatic transmission.

These latter two models suffer from noisy engines and a gearbox that is forever changing down at the merest dab of the accelerator.

What should be a relaxing journey riding a wave of torque becomes a frustrating experience.

Whereas in the 2.0D progress is serene, if a little slow.

With 136bhp the smallest V70 diesel is never going to be a ball of fire, but realise this and you’ll make relaxed progress.

It encouraged me to take things a lot more slowly during my week behind the wheel – perhaps there’s a subliminal health and safety message in this car.

There’s also loads of room inside and one-touch mechanisms to fold the rear seats down.

This creates 1,600 litres of load area – slightly down on the Audi A6 Avant and BMW 5 Series Touring, but still enough for most needs.

However, with the rear seats in place the V70 is the most spacious estate car.

Up front there’s the familiar Volvo architecture with light coloured seats and dashboard, the ‘floating’ centre console and a mix of wood and metal trim.

It’s all very Swedish and IKEA, and in the main works well.

In SE trim the V70 is well equipped, too.

All-in-all, there’s little to fault with this new addition to the V70 range. Now let’s see how it compares against its rivals in wholelife cost terms.

P11D PRICE
All four cars are in entry-level trim which means 17-inch alloy wheels (16s for the Saab) and power outputs ranging from the Volvo’s 136bhp to the BMW’s 177bhp. The Audi delivers 140bhp and the Saab 150. The Audi offers the most spacious load area.

EMISSIONS AND TAX RATES
BMW’s EfficientDynamics technology means nothing can touch the 520d – emissions of just 136g/km mean a 40% taxpayer will face a benefit-in-kind tax bill of £162 a month. The Volvo follows on £185 a month, with the Audi and Saab trailing at £208 and £203 respectively.

SMR COST
All four cars are well matched in terms of service, maintenance and repair costs over three years and 60,000 miles. The BMW with its Service Inclusive package edges the victory here, costing just under £2,800 over a typical fleet lifecycle, compared to just under £2,900 for the Saab in last place.

DEPRECATION COST
With a competitive front-end price and the highest retained value percentage, the Volvo wins here with CAP estimating will retain 45% of its cost new after three years/60,000 miles. The BMW is second with 42% retained value, followed by the Audi on 41% and Saab on just 27%.

WHOLELIFE COST
With a clear advantage in depreciation costs, the Volvo wins, although the BMW runs it close with a huge lead in fuel costs. The V70 will cost just under £26,700 to run over three years/60,000 miles – £150 ahead of the 520d in second. The Audi and Saab are well adrift.

VERDICT
Viewed in isolation the Volvo V70 in entry-level diesel guise is a very good car. It is decent to drive, well equipped and offers plenty of load space. It’s certainly the star of the V70 range for fleet drivers.

But… and there’s always a but, this model sector features the BMW 520d which offers all of the Volvo’s key attributes but is much more powerful, much more economical, far cleaner and cheaper for drivers in terms of benefit-in-kind tax.

Factor in that it is great to drive and has a premium image and the 520d is the winner, despite being fractionally more expensive to run than the Volvo.