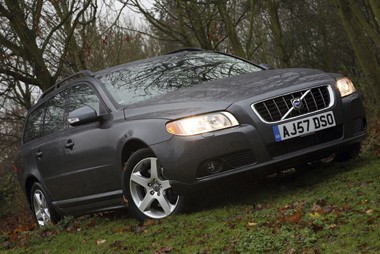 A family skiing trip to the southern Alps means either airport hell with kids, luggage and the usual budget airline shenanigans, or miles of immaculate autoroute driving.

I always prefer the latter and this time had an opportunity to pile the Kenyon family and kit into the long-term test V70 D5 for the 700-mile journey to Grenoble.

The V70 is Tardis-like. It looks small from the outside compared to some executive estates but the space inside is superb.

The boot (815 litres) swallowed three large suitcases with ease and still had plenty of room for ski boots. Importantly, visibility in the rear-view mirror was left clear.

This meant no uncomfortable booster seats were needed and the kids barely let out a peep all the way between sleeps and DVDs.

The six-speed Geartronic automatic gearbox was smooth and the acceleration from the diesel engine effortless on the long autoroute stretches, although slightly less accomplished on the windy stretch from Grenoble to the resort.

The Volvo’s pop-up satellite navigation system with steering wheel controls was simple and intuitive to use and ensured there were no navigational glitches en route, and the V70 ate the miles in fine style.

This sort of load-carrying cruising is what the Volvo D5 does best and we arrived in the resort eight hours after exiting the Channel Tunnel with no aches or pains – except for my left leg.

The automatic geabox and high volume of autoroute driving meant the left leg did not get a huge amount of pedal use – so you want to rest it against the centre console.

Unfortunately, while this console was smart and well laid out, it had rather sharp edges which dug uncomfortably into my leg.

I was also a little surprised to only get 32mpg from a predominantly cruising journey (Volvo claims a 38mpg average).

The return involved a very short stretch through thick snow (the last 24 hours of the week was solid snowfall).

A set of Michelin snow socks with elasticated thick fabric tread on the front wheels meant what could have been a dicey descent from the resort was efficiently handled.

Best of all, it only took half a minute to remove them and we were on our way north where the V70 handled the French autoroutes with ease.

My earlier impressions were confirmed – hugely comfortable (except for the driver’s left leg), not a peep out of the kids in the back, effortless power for overtaking and still an average mpg in the very low 30s.

So the V70 D5 passed the ‘take the family to the Alps including kitchen sink’ test with flying colours – with only a numb leg as a downside.