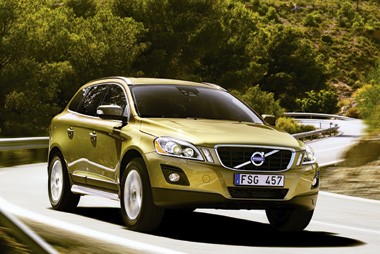 Volvo has just launched a range of turn-key police cars available to the nation’s police forces.

But more than just providing the means by which to get to accidents, Volvo is also doing its bit to reduce collisions altogether with the introduction of its new XC60 crossover model.

The XC60 comes with City Safety, Volvo’s latest crash avoidance innovation. Impressively, Volvo is introducing this system on all XC60s in the range instead of only on a few top trim level models or as an expensive option.

Using lasers, the City Safety system is able to prevent the sort of collisions that happen at town speeds.

Actively braking should the driver not hit the middle pedal themselves, City Safety cannot completely prevent all accidents – between 9mph and 19mph it can only help reduce the severity of any inevitable impact.

But Volvo’s statistics show that a huge number of collisions are low-speed knocks due to driver inattention around town, when cars are regularly travelling at less than 9mph.

At such speeds, the safety aid can completely stop the car without any intervention from the driver.

City Safety is good news for potential fleet customers as employees driving XC60s should be involved in less of the sort of expensive low-speed knocks that hit the bottom line on a fleet manager’s spreadsheet.

A new crossover, the Swedish firm no doubt hopes that the smaller sibling to the XC90 continues that car’s success, which even today boasts solid sales.

The five-seat-only XC60 is more compact than its seven-seat relative, and more affordable too, with prices starting at £24,750. For that, you’ll get into the entry-level 2.4D AWD.

Volvo is offering the XC60 with three different engines.

The T6 petrol is anticipated to make up just 3% of UK sales – blame the 23.7mpg combined consumption and CO2 emissions of 284g/km for that. Volvo is also offering two diesels, with the 182bhp D5 version anticipated to be the bigger seller over its slightly lower output 161bhp relative.

Volvo is expecting 40% of its XC60 sales to go to fleets, with SE trim level making up 60% of those sales.

Only 10% are likely to be the entry-level S model, the remaining 30% made up of the top specification SE Lux.

EuroTaxGlass’s figures are even more favourable – projecting a 46% return on the 2.4D and 47% on the D5.

Residual values and pricing aren’t the only areas where the XC60 should have the upper hand over its key rivals.

Volvo also claims the XC60 is cheaper to service than its Land Rover and BMW rivals.

Throw very competitive pricing into the equation and the XC60 looks like an attractive proposition to fleet buyers.

Where the new Volvo falls slightly short of the BMW X3 and Audi Q5 options is on emissions.

Both the 2.4D and D5 models produce 199g/km of CO2 when fitted with the manual gearbox, while BMW’s X3 2.0d makes the most of its EfficientDynamics and betters that with a figure of
172g/km.

Audi’s new Q5 is comparable to the X3, and even Land Rover’s aging Freelander with its TD4 engine is able to better the XC60’s 199g/km.

Already available to order, the XC60 reaches showrooms in November. Those wanting the greenest XC60 might want to wait until next year when Volvo will be introducing a more tax-friendly front-wheel drive version.

A hybrid is also due to join the range within the XC60’s lifecycle.

Volvo has learned from experience with its XC90 that not everyone wants their lofty family machines to set lap times at the Nürburgring.

So, despite several references to ‘sporty handling’ in Volvo’s press literature, the XC60 actually provides a drive that errs more towards comfort than ultimate dynamic prowess.

The steering is precise enough, but even with the choice of three different weighting settings via the XC60’s onboard computer, you’ll rarely feel anything resembling feedback though the wheel’s chunky rim.

Only the sharpest of ridges upset the fine ride of the XC60, some roll in the corners is the slight but not unwelcome trade-off for the decent ride comfort.

Floating centre consoles have become a Volvo interior signature and in the XC60 it is angled towards the driver.

The cabin really is a very pleasant place to spend time, the seats comfortable, and the controls clear and simple.

Volvo’s interiors have always been Fisher Price in their clarity and ease of use and the XC60 is no different.

That all makes it a very relaxing, cosseting driving environment, though one that’s let down slightly by the noisy five-cylinder turbodiesel engine.

Push the 2.4-litre diesel and the claimed performance is there, though sadly it is accompanied by a bit of a racket.

Compared to its more modern rivals, Volvo’s turbodiesel is feeling old – the problem exacerbated if you mate it with the slow-witted six-speed automatic transmission.

The 4x4 system is entirely automatic, meaning in the event you ever do venture off-road you’ll not need to mess about with transmission settings.

Volvo has stuck with its proven formula for the XC60.

Comfortable rather than sharp to drive, the XC60 appeals on many levels.

Pricing is competitive and Volvo’s commitment to safety makes the XC60 an ideal family car.

The overall package is let down somewhat by the five-cylinder turbodiesel, which isn’t able to match its key rivals on emissions or refinement.