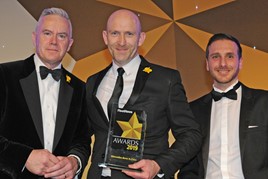 Mercedes-Benz has enjoyed a strong period of sustained success in fleet dating back to the launch of the third-generation A-Class in 2013.

Over that time, its true fleet registrations – as a measurement of ‘contract hire/leasing’ and ‘fleet other’ by the Society of Motor Manufacturers and Traders – has risen 49%, from 53,600 to almost 80,000.

Mercedes-Benz’s own true fleet calculations, which remove certain channels from fleet other, put the number at 63,067 cars in 2019, a year in which it collected best compact premium car for the A-Class and best premium car for the C-Class at the Fleet News Awards. It represented a small 2% fall year-on-year in a sector down 6%.

The priority this year is to build the momentum by targeting growth in the corporate and SME (small-to-medium enterprise) markets.

Head of fleet sales Tom Brennan is bullish about the opportunities for two reasons: new product and a restructured fleet team.

One year on from his appointment, Brennan has divided his team into three components: leasing/Motability, rental and end-user/retail. He recognises that it follows a path well-trodden by other manufacturers, but it is a fundamental change from the previous structure which lumped together end-user corporates with leasing.

Brennan has also created four new roles: two contract hire and leasing managers (one for north and one for south), one fleet operations manager and an aftersales development manager.

“We made the changes last October and it will help us to grow in the SME and corporate markets,” says Brennan in his first official interview with the fleet press.

“It feels like there is big pent-up demand in fleet and we expect to see a move back from grey fleet and PCH because of the BIK options offered by ultra-low emission vehicles, especially BEV and PHEV.”

Under its Ambition 2039 strategy, Mercedes-Benz is targeting a carbon-neutral car fleet within two decades for which it requires more than half of global sales to be full electric or plug-in hybrid by 2030.

Ten battery electric models will be launched by 2022, of which three – including EQV (V-Class) and EQA compact car – are scheduled in the UK this year.

He is confident of fulfilling fleet demand for electric product; unlike some manufacturers, vehicles will not be exclusively reserved by deposit, which has excluded many businesses from placing a pre-order.

“We see a bigger opportunity in fleet and so we will have the supply to deliver our growth ambitions. I’ve built my team around this product,” he says.

Consequently, the roll out of electric and PHEV models is crucial to Brennan’s fleet aspirations, not least as they counter the potentially damaging impact of the WLTP tests on diesel/petrol CO2 emissions.

He is dismissive of the Government estimations of a 10% jump in emissions as the figures move from NEDC to WLTP – “it is absolutely not what we are seeing” – with Mercedes’ own data showing 20% increases for petrol and 30-40% rises for diesel. Conversely, CO2 emissions have fallen slightly for plug-in hybrid models as the battery element is more prevalent under the WLTP test cycle.

“The biggest issue is the data – it doesn’t exist in the way it should,” Brennan says. “It can require API (application programme interface) links, which are hard to manage, and you have a range for emissions dependent on the model derivative. It’s a grey area.”

This has reduced the data complexity and will enhance residual value forecasts as the packaged options now have a Cap code. Simplification also makes it easier for drivers to build their car online, catering for the growing demand for digital purchasing.

With the rise in CO2 emissions due to WLTP, does Mercedes-Benz anticipate a move away from diesel towards petrol? Brennan sees it as less a migration, more an opportunity to attract new customers.

“Diesel still has a role to play, especially in small cars,” he says. “In bigger cars, E-Class upwards, because of BIK, it will be more challenging. Here, we see a move to PHEV and BEV.”

The one caveat to a full-blown stampede towards electric is the uncertainty created by muddled Government messaging.

“We need clear policy and the infrastructure,” he says. “Home charging is critical and work charging is very important. But we need public charging – our view is that it’s there when it’s needed.”

In 2019, Mercedes-Benz increased its rental registrations in three of the four quarters, taking it to a year-on-year rise of 12.5%, although Q4 was down 58%. It was the second fastest growth channel, behind Motability which was up 36%.

Despite the rise, rental accounts for a manageable 7.8% of total volume, behind the industry average of 9% and it is lower than BMW but higher than Audi.

“We have a stable supply of rental; it will ebb and flow, but we don’t see it changing,” says Brennan. “We have a fixed position with our big five rental partners where we manage the supply. It’s a good marketing opportunity and they are also being used for car clubs as well.”

He adds: “We see Motability as an opportunity for our network, especially with small cars. There is no remarketing risk because they are good three-year-old low mileage vehicles.”

Mercedes-Benz established its CASE (connected, autonomous, shared services and electric) division four years ago to future-proof the business. Research is continuing across all elements, but the two most relevant for today are electric and connected.

The company is building a business version of its Mercedes Me driver app to help fleet decision-makers and leasing companies manage their vehicles more efficiently.

It will offer a pick and mix for customers with real-time data on driver behaviour, car tracking/location, usage/utilisation, SMR diagnostics and even predictive maintenance. Already available in Germany, a UK launch is imminent.

“We have sight of the customer types and where we want to go first,” Brennan says. “It will come with a cost, so we have to look at where the most value is for fleets and leasing companies.”

Mercedes-Benz has a three-pronged attack in the electric market: