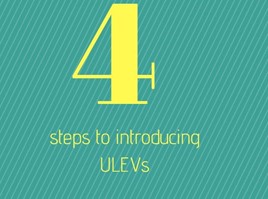 Adding low emission vehicles to a fleet can cut CO2 and costs. But what does an organisation need to consider? Andrew Ryan reports.

Cost, environmental issues, city charging schemes, company ethos – these are just some of the many reasons why organisations have either introduced or are looking to add ultra-low emission vehicles (ULEVs) to their fleets.

When the right vehicles are introduced into the right roles, they do have many beneficial effects.

However, if a wrong decision is made it can prove to be an expensive mistake, having both cost and operational implications.

This makes it important that fleets do their research thoroughly before taking on ULEVs, says Katie Colledge-Price, managing director of Carpendale EV Consulting.

“Introducing new sustainable electric vehicle programmes is not something that should be done quickly,” she adds.

“It has to be done on a long-term basis because EVs can completely alter the way a fleet is managed.”

An organisation should be strongly committed to introducing ULEVs to get the most out of them, says Paul Gambrell, transport consultant at Energy Saving Trust (EST), which carries out reviews to help fleets adopt the technology.

“With some fleets we go to, you get the feeling they are only playing lip service to it and – surprise, surprise – that sort of fleet doesn’t usually have the same success with ULEVs as the organisations that say ‘we are going to do this, we are really going to commit to it’,” he adds.

“At the end of the day, businesses and organisations are not taking on ULEVs because it is a nice thing to do; it’s got to be cost and operationally viable, and the fact that the numbers and types of vehicles are increasing all the time mean more and more organisations are able to take advantage, and they are.”

Here we look at the four key steps fleets can take to help them make the right ULEV decisions.

The first step is for an organisation to identify which vehicles on its fleet can be replaced by ULEVs.

“For a lot of fleets we work with, it is a case of finding the right vehicles that fit the journey profile that the ULEV can do,” says Paul Gambrell.

“With some companies, they really want to use ULEVs because they know they are more efficient and they are happy to modify the journey profiles to accommodate them.

“In the main, though, it is now more the case that the available vehicles are beginning to meet the journey profiles that the company needs, so they are not having to alter the way they do business, they just use a ULEV rather than an internal combustion-engined one.”

However, there are still limitations to what ULEVs – particularly fully electric vehicles – can do, and Gambrell says the availability of good data on existing vehicles and the way they are used can avoid costly errors being made.

“The better the data when we are doing a review, the better we can look at what the outcomes are,” he says.

“If the fleet has got telematics then great, because you can do the analysis on actual journeys, but if not then it does come down to how often you have odometer readings – whether from fuel card data or some people keep a daily log of what the vehicle is used for – and working them back to a daily mileage.

“Having identified vehicles that look suitable, it is then a case of checking as to whether that is the actuality.”

To determine which vehicles can be replaced with pure EVs, EST sets both lower and upper mileages as guidance.

A slightly different approach should be taken for plug-in hybrids, where electric-only range is not as much of an issue as they can be run on petrol or diesel when the charge runs out.

“Range isn’t so much the issue there, it is about how they are being used,” says Gambrell.

“Having said that, there is no alternative other than sitting down and ploughing through the raw data of what your vehicles do and identifying those where they may actually meet the need.”

Once fleet decision-makers have identified opportunities where vehicles could be replaced with ULEVs, they should carry out a wholelife cost analysis of the prospective vehicles against the petrol or diesel models that would typically be used in that role.

Generally, ULEVs carry a P11D price premium over their petrol or diesel counterparts, but fleets can make significant savings in fuel and service, maintenance and repair (see table, which compares the costs of running diesel, plug-in hybrid and fully-electric Golfs).

Nottingham City Council, for example, replaced eight diesel vans with fully-electric Nissan e-NV200 small vans in December 2015 and found they were 80% cheaper to run when comparing vans of a similar size, even taking electricity into account.

Another example is Leeds City Council, which is expecting to save more than £40,000 after taking on 41 e-NV200 vans to replace diesel models.

Its financial case is based on the total cost of ownership – price, maintenance and fuel.

While the purchase price was higher than for the diesel alternative, fuel and SMR costs are significantly lower, netting an overall saving of £1,000 per vehicle over five years, based on 10,000 miles a year and a 60-mile range versus 40mpg for the diesel van.

Traditionally, residual value setters expected EVs to suffer heavy depreciation, but this has not been the case as used car buyers have become more confident about the reliability of the technology, with fears over areas such as battery degradation proving unfounded.

One example of this is Cornwall-based C&C Taxis, which runs Nissan Leafs and e-NV200s. It has run a number of its vehicles to 150,000 and 200,000 miles – beyond the normal lifetime of a diesel or petrol car – with no significant battery degradation.

“The batteries are proving incredibly resilient – the battery argument is redundant,” says Tom Callow, director of communications and strategy at Chargemaster.

“The other issue which is driving strong RVs is the lack of volume in the used market which means the values are really strong at the moment. We don’t see any sign of that stopping.”

The Leaf is a perfect example of this. In 2016, the number of Leafs returned to Nissan as leases came to an end numbered 500. Last year this rose to 3,000.

“The volume went through the roof,” says Karl Anders, national EV manager at Nissan. “However, if you took a 12-month term Cap HPI value for the old 30kW model in January, it was just more than £10,000.

“Halfway through the year we announced the new 40kW car, so you would think the RVs would soften, but that same figure in December was more than £15,000. The values went up significantly.

“If you compare the old car to the new one, there is a £4,000-to-£5,000 uplift. The RVs are increasing because although the supply is going up, the demand is advancing much faster.”

The cost of installing any necessary charge points should be considered, as should the availability of grants which are aimed at encouraging take-up of ULEVS.

They run until October in their current form, although the Government has stated they will be under constant review and will continue in some form until at least 2020.

Employers are also able to receive £300 towards the cost of installing charge points, up to a maximum of 20 sockets. The Government has proposed increasing this to a maximum of £500 per socket.

If, after the first two steps, a fleet decision-maker has found that ULEVs are both viable and cost-effective alternatives to petrol or diesel models, then there are some operational matters to consider.

These involve deciding when and where to charge, as well as whether the vehicle’s duty cycle should be changed, possibly through route optimisation, to get the best out of the new technology.

“Charging is the big issue,” says Gambrell. “For example, if you have electric vans and the driver takes the van home at night, the first question is: does the driver have off-road parking and, if so, are they happy to have a charge point installed?

“Unfortunately, in a lot of urban areas where an electric van makes huge sense, economically and environmentally, one of the issues we often face is that there is no off-road parking and no security of electricity supply.

“There is so much more public charging infrastructure around now so sometimes it is possible to use that, and there is increasingly a focus of putting some form of on-road system of charging for residential areas, but it does remain a challenge.”

He adds: “If you move over to cars, in our view a plug-in hybrid should not be given to a driver if they haven’t got the opportunity to charge it at home, because it is all too easy to drive it around and never charge the battery which can actually be worse than giving them a petrol or diesel car.”

If vehicles return to work premises overnight, then the organisation has to make sure that it has sufficient charging facilities.

The development of smart charging, where software can manage when and how quickly vehicles are charged to ensure the demand on the local electricity network does not exceed its capacity while at the same ensuring they are fully charged when next needed, is expected to become more widespread in the near future.

Dependent on the nature of their operations, some fleets may need to consider installing rapid chargers which are more expensive than traditional fast chargers.

Winning driver buy-in is key to ensuring ULEVs are successfully integrated into a fleet.

For car drivers, an effective way to do this is by highlighting the cost-savings they can make through both benefit-in-kind (BIK) tax and fuel, says Katie Colledge-Price.

“Make sure you demonstrate this to drivers, because one of the biggest reactions is ‘I can’t believe how much money I am saving on fuel’,” she adds.

Data from KeeResources shows that, for example, a diesel Volkswagen Golf 1.6 TDI 115 SE Nav costs 8.62 pence per mile in fuel. In comparison, a fully-electric e-Golf costs 3.14ppm. Over 10,000 private miles, this means the driver will save £548.

It is important to encourage employees to experience ULEVs first-hand and over a decent period of time so they can get used to the different technology.

“If you go to a dealer you may get half-an-hour for a test drive and that is not enough time,” says Colledge-Price.

“If possible, drivers should be able to use a car for two-to-four days so they get used to driving it around town, on the motorway, charging it and going out and doing their shopping in it.

“It gives them time to really get a feel for what a car is like.”

“On day one, they had charge point anxiety which was partly perception because of the different gauges in the vans, but they got used to it very quickly,” says Terry Pycroft, head of fleet services at Leeds City Council.