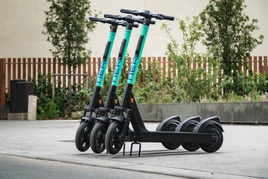 This feature originally appeared in the November 2020 edition of Fleet News. Read the article in the digital issue of the magazine.

Trying to determine the future of mobility is like attempting to complete a jigsaw puzzle knowing what the final picture is, but not knowing what the pieces will be or how they fit together.

For mobility, the final outcome is the efficient and low emission movement of people and goods from A to B, but how – and, in some cases, if – the different emerging technologies will play a role in this is still unclear.

These include mobility as a service (MaaS), autonomous vehicles and electric cars and vans, but there is a general consensus that electric scooters (e-scooters) will play a significant part.

“E-scooters represent a large piece of the puzzle in decarbonising urban transport,” says David Philipson, transport technical specialist at Cenex, who authored a Maximising the Benefits of E-scooter Deployment in Cities report earlier this year.

“Though still in its infancy as an industry, e-scooters are already providing a genuine, affordable green solution to private car use in city centres which will improve over time.

“It is evident that e-scooters are here to stay, with operators committed to continual improvements for the benefit of both the environment and society.”

The Government is keen to encourage the uptake of the technology. The Future of Transport Regulatory Review from the Department for Transport (DfT) calls for evidence saying road users could shift from other vehicles to e-scooters for short journeys.

“Hireable electric scooters can allow people to take public transport instead of their car, knowing they will have transport for either end of their journey and without the need to carry a bike, scooter or other equipment with them,” says the DfT report.

“Electric scooters could be incorporated into a MaaS platform and be integrated as part of a multimodal journey.”

The UK National Travel Survey 2018 showed 58% of car trips are less than five miles and this drops to less than three miles in urban environments.

“Given the typical distance of an e-scooter trip is one-to-five miles, there is a clear opportunity for e-scooters to replace car journeys within cities and help ease congestion,” says Philipson.

He says their manouevrability through traffic means that short journeys can be much quicker than private car travel in city centres, with the additional ability of being able to park e-scooters at destinations.

Cenex says research of existing schemes around Europe has found 30% of e-scooter journeys replace car travel (a combination of private car use and ride-hail, e.g. taxi, Uber or Lyft), with 50% of rides replacing active travel (walking, cycling or e-bike) and 12.5% of rides replacing public transport, while 7.5% of users would not have made the trip if e-scooters were not available.

As car journeys have the largest carbon footprint (if petrol or diesel) it is clear the higher the percentage of e-scooter journeys replacing car travel, the greater the environmental benefit.

Using these figures for modal shift and calculating the overall CO2 impact on the transport system, Cenex has calculated that e-scooters reduce CO2 by 45% across all journeys. Obviously, this figure comes down as the proportion of electric cars goes up.

“While this clearly demonstrates the potential positive impact that e-scooters can have in reducing greenhouse gas emissions, more needs to be done to ensure a higher percentage of journeys are replacing private car use and not active travel and public transport,” says Philipson.

The use of e-scooters is currently banned in the UK apart from on private land, and the Government had planned to allow a number of e-scooter rental trials to take place in UK towns and cities in 2021.

However, it brought this date forward to July this year as a way to boost the green recovery from the Covid-19 pandemic and to help mitigate the impacts of the ongoing climate crisis.

Year-long trials are being held in 20 areas. The DfT hopes they will help it to understand whether e-scooters can reduce road traffic and be efficiently integrated into existing networks, as well as assess their safety implications for riders, pedestrians and road users.

The first area to host a trial was Tees Valley, which now has nearly 100 scooters available to hire in Middlesbrough, Redcar and Hartlepool.

Between its mid-July launch and the end of September, 3,200 people had clocked up 25,800 miles. Tees Valley hopes the number of scooters will increase to about 500 over the next year.

“People are embracing these e-scooters as a clean, convenient socially-distanced alternative to other types of public transport and the data shows it’s not just a novelty, we have a large proportion of repeat customers using them for commuting,” says Tees Valley mayor Ben Houchen.

Voi, which is operating e-scooter trials in a number of areas including Bristol, Cambridge, Liverpool and Birmingham, says the vehicles can be used by workers instead of “unnecessary short taxi rides and being stuck in traffic”.

It demonstrates this by using one of its customers as a case study: business consultant Richard Crooks commutes to Birmingham for work and uses an e-scooter to travel from the train station to clients around the city.

“It reduces my travel time between meetings, which means I can be more productive,” he says.

The trials have not all been plain sailing, however. There were complaints initially about the scooters being used in some of Middlesbrough’s indoor shopping centres, leading to a number of narrow misses, while police spoke to two youths who were spotted riding a scooter on the busy A19 on the outskirts of town.

Also, a trial in Coventry was halted after five days following concerns about the e-scooters being used on pavements and in pedestrianised areas, with reports of riders weaving in and out of traffic.

Voi, which was operating the scheme, said “a few anti-social people” were “deliberately and persistently breaking the rules”.

This adds weight to the safety concerns which have been voiced by some critics. Among them is the National Federation of the Blind UK (NFBUK), which has written to the DfT warning e-scooters contribute to a “dangerous, frightening, intimidating and hostile urban environment”.

Andrew Hodgson, NFBUK president, says local authorities are not fully aware of the significant dangers of e-scooters and the headaches they create for public bodies trying to regulate their use.

“After learning about the accidents e-scooters have caused, it is very clear to me they are not fit for purpose,” he says.

“Riders appear to fall from them very easily, causing serious head injuries along with many broken bones.”

“It is also clear from practical experience, dockless e-scooters simply do not work as the machines can end up anywhere in the city.

“This causes totally random potential barriers across city pavement and public space for disabled and elderly people and mothers with buggies.”

The DfT says it realises the importance of finding the correct balance between maximising the benefits they offer and keeping road users safe.

“Safety will always be our top priority and our current trials are allowing us to better understand the benefits of e-scooters and their impact on public space, helping us to design future regulations,” adds a DfT spokesman.

The UK Transport Committee of MPs has already called on the Government to legalise e-scooters for road use within the next 18 months, while Cenex’s view is that the potential benefits of e-scooters far outweigh the few negatives.

“EScooters have their place in the transport networks of the present and future, offering first- and last-mile travel solutions that are inclusive and sustainable,” says Philipson.

What exactly is an e-scooter?

The Department for Transport defines an e-scooter as being a motor vehicle that:

How do e-scooter rental schemes work?

The common operating model for e-scooter rental providers is to place the vehicles in central locations close to city amenities, other transportation hubs (such as train stations) or in high footfall areas.

Throughout the day their charge will decrease due to use, and operators commission third-party gig workers to collect e-scooters that are low on charge in the evening and transport them to a facility where they can be recharged overnight.

Once charged, units will be placed back in designated areas and the cycle starts again.

Some operators employ swappable battery technologies which removed the need for gig-workers to transport scooters in vans and, instead, use other forms of low carbon transport, such as cargo bikes, to travel between each e-scooter.

What do they cost?

Typically, users will have to pay a fixed cost to unlock the e-scooter and then pay for the time used.

For example, in Birmingham and Coventry, the e-scooters will cost £1 to unlock and 20p per minute to ride. Those who are looking to use the e-scooters regularly can have unlimited rides for £40 per month.

Neuron, which operates the scheme in Slough, charges £1 to unlock the e-scooter and 18p per minute after that.

More frequent users have the option to purchase Neuron Passes, a subscription service, available in three-day (£15), weekly (£22) or monthly (£36) options. The packages will allow users to ride as
many times as they want for up to 90 minutes per day.

What is the law?

Privately-owned e-scooters remain illegal to use on roads, pavements, parks and any other areas.

The only place they can legally be used is on private land with the permission of the landowner.

People found breaking the rules and riding a privately-owned e-scooter on public roads risk a £300 fine, six penalty points, or even losing their licence.

The only exception to the law is rented scooters which are permitted by the Government for a 12-month trial period.

Other safety rules include not using a mobile phone while riding, only using the vehicle within the local area hosting the trial and not riding while drunk or otherwise intoxicated.

As e-scooters are classed as motor vehicles, riders can be prosecuted under drink- or drug-driving laws as careless. Dangerous driving offences also apply to users of e-scooters.

The DfT recommends users wear a cycle helmet, but it is not a legal requirement.

Where are the trials taking place?

There are currently trials in 20 areas of the UK.

Transport for London (TfL) and London Councils have launched a competition to select up to three operators for a 12-month trial of rental e-scooters in the capital.

The Ride Safe School, an e-learning platform co-designed with DriveTech, aims to to educate people around e-scooter safety and responsible use.

DriveTech, part of the AA, is urging businesses not to overlook e-scooters when it comes to risk management.