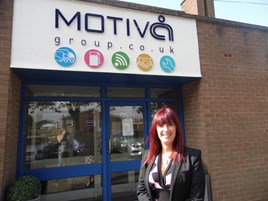 Motiva Group is hoping to create a string of new jobs as part of an ambitious plan to double the size of the business by 2017.

Motiva appointed its first new business development manager earlier this month and several more new roles are likely to follow as a result.

Peter Wright, sales and marketing director at Motiva Group, said: “We’ve enjoyed record growth over the last couple of years and are now looking to build on that.

“Our target is to double the size of the business again by 2017 and we’ve set out a structured strategy to help us achieve that goal.

“We want to increase our customer base and that’s likely to lead to a significant expansion of both our customer service and fleet operations department before the end of the year.”

Paula Holt, formerly regional fleet sales manager at a Yorkshire-based vehicle retail group, will focus solely on bringing in new business. And her role will be crucial to the push for new growth, according to Wright.

He added: “Paula is very experienced in the industry and will have a pivotal role as new business development manager.

“She’ll work with our new lead-generation partners to help convert prospective clients into long-term customers and, if we can meet our targets, she’ll be the first of several new faces.

“We’re likely to be looking for another business development manager in the next six months and will make further additions to our back-end team.

“The business is now strong enough to sustain significant growth and has massive potential for the future. We think there’s a big opportunity for us and this is another significant step along the way.”

Holt is back on familiar ground, having spent three years as an account manager at Motiva Group, based in Stoke-on-Trent, earlier in her career.

She’ll be working closely with lead generation company Return On Investment, which recently teamed up with Motiva Group, and can see a wealth of opportunities in a buoyant market.

She said: “When I left Motiva in 2009, the motor trade as a whole was struggling in the darkest days of the recession.

“Businesses took the corporate route for a while because they were understandably cautious, but things seem to be very different now.

“The industry is very much on the up again and people seem to be going back to companies led by customer service.

“I think many business people prefer to deal with a friendly face with whom they can build up a rapport and that puts Motiva Group in a strong position as that’s what the company is all about.”

Holt has been in the vehicle industry throughout her career and says her experience and breadth of knowledge will stand her in good stead for her new role, even if some aspects will be very different.

She added: “The tables have turned in some respects because, from selling vehicles to the corporate sector, I’ll now be approaching businesses looking for contract hire and all of the other services Motiva Group provides.

“But having been on the other side, I know what they’ll be looking for and, having worked at Motiva before, I know it’s a company which can deliver.”