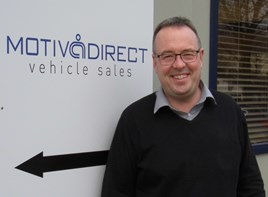 The firm launched Motiva Direct last year when significant growth in other areas of the business led to a considerable increase in end-of-contract stock.

The company now wants to see the operation double in size and has set a target of £5 million turnover by the end of next year.

Peter Wright, sales director at Motiva Group, said: “The number of cars and commercials coming back to us at the end of their contracts every year has increased substantially, so it makes sense for us to make them available to the private market.

“We’re typically turning our entire stock around on a monthly basis and sales are growing all the time.

“A turnover of £2.5 million after 12 months is not bad from a standing start and we now want to build on that by doubling both stock and sales by the end of 2017.”

Motiva Direct uses set criteria to select the best vehicles returned to the company at the end of their contract or lease.

It’s a system that delivers significant advantages to the public, in terms of both price and quality, according to used vehicle retail manager Warren Shropshire.

He said: “Because we’re selling our own vehicles direct to the private market, we can pass on decent savings and, as they were all originally supplied from new by us, we know the entire history of each one.

“By taking only the best from our stock, we know the vehicles that have been well looked after and that gives customers confidence along with added peace of mind.”

Motiva Direct is concluding deals at a rate of between 20 and 25 a month with an appointment-to-conversion rate as high as 70 per cent.

Shropshire added: “The vast majority of customers so far have found us online and, because they’re coming from all over the country, our conversion rate has been very high.

“Our new website features as many details as we can provide along with more than 30 pictures, so people know all about each vehicle before they see it first hand.

“We have an average of between 25 and 30 cars and vans on the books at all times and we’re adding fresh stock daily to try to maintain a strong level of interest.”