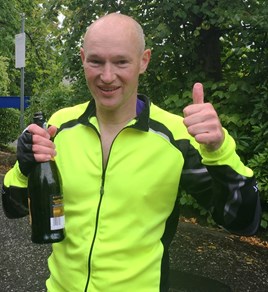 Following the three-day, multi-discipline challenge, called Maggie’s X3, the amount raised by colleagues, friends, customers and suppliers was £12,600 - £2,600 ahead of target.

He started from Maggie’s Centre in Inverness and, on the first day alone, completed a total of 71 miles over six stages, involving road cycling, running, kayaking down Loch Ness and mountain cycling, finishing in Fort William an hour ahead of schedule.

Day two involved a 47-mile run from Fort William to Inverarnan over seven stages, a particularly arduous test as it meant running close to a double marathon distance across some really punishing terrain and climbs including the ominously named ‘Devil’s Staircase’ – an infamous climb located in Glencoe and a focal point of the famous West Highland Way.

The final day was a mix of four stages, including a 12-mile kayaking stage across a choppy Loch Lomond, followed by a drizzly 27-mile cycle to Maggie’s Centre in Glasgow. Despite the previous days’ mammoth effort, he managed to complete a hat trick of on-time finishes – quite a feat considering the enormous challenge.

Blackmore said: “Maggie’s X3 was, without doubt, the most challenging thing I’ve done to date – but equally, the most rewarding.

“A total of168 miles in three days sounds extreme, but travelling the beautiful hills, trails, and lochs of the Scottish Highlands wasn’t exactly a chore. I’m just delighted to be able to do my bit for Maggie’s. Raising over £12,000 for such a deserving cause was well worth the effort.”

Martin Brown, Fleet Alliance managing director, who is also a board member for Maggie’s Centres, said:  “This was a fantastic effort by David and our hats are off to him for his truly courageous and outstanding achievement.

“Our initial target for the event was £10,000 but with fantastic donations from staff, suppliers, friends and family we have blown that target out of the water. Our heartfelt thanks to them all.”

Kerry Craig, centre head at Maggie’s Glasgow, said: “This was a truly remarkable achievement by David. Support like this is invaluable in making sure we can continue to be here for anyone with cancer, and their family and friends, when they need us most. We would like to say the most sincere thank you to all those who have supported David through this quite outstanding effort.”