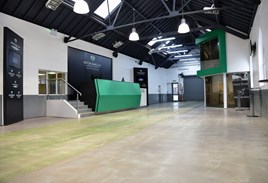 Aston Barclay’s Shropshire-based Press Heath site has been awarded with LeasePlan’s Best Service Provider for its strong performance throughout Q3 2016.

Aston Barclay’s Westbury auction centre was also given Gold status for its service provision, performing particularly strongly against line-up and valeting. This enabled Aston Barclay’s measured sites to achieve an overall Platinum rating for late notifications, with Gold accolades awarded for its performance in admin, valeting and line-up.

Martin Potter, Aston Barclay’s group operations director said: “Aston Barclay is constantly striving to provide an unrivalled, personal service to its customers. For both northern centres to perform extremely well in both service and value is testament to, not only our staff in Prees Heath and Leeds, but those across the entire Group.”

Paul Mason, LeasePlan’s general manager added; “Aston Barclay’s Prees Heath and Leeds sites continue to set the standard in terms of their service, fully meriting yet another award for Prees Heath in Q3. Thanks to strong overall performances between July and September across all centres, it fully deserves its overall Gold service award.”