How I got here: Andrew Cope, Essential Fleet Services 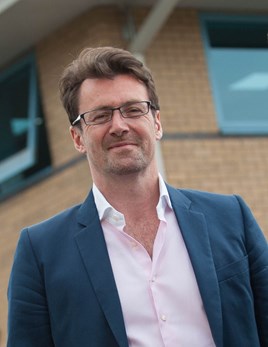 I went to university but I dropped out about halfway through.

I just thought to myself ‘I’m not going to be an engineer so what is the point?’

I did the wrong thing at uni, I should have gone and done something I was interested in – but then my career probably would have gone a different route.

After I left university I went travelling round Europe, got to about 23 and suddenly thought ‘better get a job to clear my debts’ and I went and joined CD Bramall Fleet Services, as was.

After I’d been there a few months the business was sold to Avis and the guys who were running that business said ‘we’re going to start a contract hire business – do you want to be part of it?’

So that’s how I became one of the original seven founders of Zenith.

We started Zenith with literally a system and a few people in one room in a mill between Leeds and Bradford.

I was the sales and account manager and the progenitor of the Zenith model was a guy called Henry Dean , who was two generations over me – I was in my early 20s and he was mid-50s – and he was something of a mentor to me.

He laid the foundations for Zenith in every way so I learned a lot from him.

The market was nowhere near as developed back in those days and there was a lot of scope for a smaller player to prosper.

Zenith is a big business now, but all those foundations were laid over many years.

They were all the layers that were built up around servicing a large corporate user.

Business is a game and you either enjoy playing the game or you don’t.

And it doesn’t matter whether you’re in baked beans or silicon chips or leasing cars, it’s all the same sort of principles –winning customers, growing businesses, developing ideas, developing people, developing teams, that’s what it’s all about.

Leasing seemed as good a place as any to me. As soon as we’d started Zenith I thought, ‘I can’t see anywhere else where I’m going to get an opportunity to influence events as quickly as I might do here’.

When Henry was thinking about retiring we were interviewing candidates (I’d just joined the board as sales director so I was part of it).

I remember we had this one candidate in and he said, ‘I’d be really interested to know where you all think the business should go in the next few years’.

We went round the table and he got to me and I said, ‘Well, we probably need to do this, this and this’.

I didn’t think anything of it but the next day they all had a meeting and said, ‘Why are we going outside when we’ve got our man here?’

What makes a good MD depends on the business and what stage it’s at.

A good peacetime leader doesn’t necessarily make a good wartime leader and the same is true in business.

But there are some fundamentals. You’ve got to be a good judge of people and have an ability to create teams.

You’re able to make other people think you know where you’re going – even if you don’t yourself.

That doesn’t mean you have to be a good salesman or orator but you’ve got to be able to articulate to those people you’ve chosen that you know where you want to go and how you want to get there, and that you impart a belief that you can do it.

It’s about those slow incremental changes over time. Good leaders understand where they got it wrong and how they’re going to get it right, and they slowly just improve over time, and their business intelligence develops.

The biggest decisions that you get wrong are normally around people, and choosing the wrong people.

That’s where you pay the biggest price because if you get the balance of your teams wrong you just can’t win.

If you look at any successful organisation it’s a team and it’s a collection of individuals who, for whatever reason, have all bought into an idea.

1989: Became one of the seven founders of Zenith Vehicle Contracts (now Zenith) initially as a sales executive.

2001: Became a shareholder as part of an MBI of Zenith Vehicle Contracts.

2003: Led first MBO of Zenith Vehicle Contracts, backed by 3i.

2014: HG Capital acquired Zenith. Cope stepped down from his post.

2014: Joined the board of FMG as executive chairman.

2016: Joined board of Synergy Automotive as a non-executive director.

We didn’t just have to convince ourselves, we had to convince other people – and it started a process within Zenith which you’re still seeing today of continual business improvement.

Looking back, at the time, we were very money focused.

But as time went by it actually became less about money because you realise you’re not really doing it for that.

It’s like saying, ‘Well, you’ve won a gold medal, why do you want to win another one? Well I just do, thank you very much’. And why not? We saw those MBOs as our Olympics – it’s how we were judging ourselves.

The first significant acquisition we did was Provecta and we did that partly to prove to ourselves that we could do it.

One of the things about private equity is they want to back businesses which they think can acquire and integrate other businesses, because it’s quite a demanding thing for a business to do, especially your first one or two, and a lot of people get it wrong.

It taught us a lot about how to do it and what to do and what not to do.

There was a template, a way of doing things, that we learned .

The Provecta acquisition also gave us real growth, and a whole load of new customers, just at the time the credit crunch crisis was happening so we managed to sort of trade through that, win a load of new customers and improve our profits year-on-year even though there was all that RV shenanigans going on and it was a real nightmare.

Unfortunately, when you acquire a business doing something similar you often end up having to lose a lot of people because of the duplication.

It’s all about communication; it’s all about clarity of what you’re doing and why, and making sure that you implement that very quickly.

The way I used to describe it to people is, ‘Look, I’m going to stab you in the front but I’m going to tell you why I’m going to take you out’, rather than doing it in a surreptitious way.

People don’t like the message they get but they like it much better than being fobbed off.

The MBOs allowed us to shift things around, to bring in new talent and drive into the business and Tim was part of that.

In fact, every other senior person was brought in based on what we thought the business needed for the next 10 years. I worked on a 70/30 principal that 70% of your promotions will come from internal, 30% external.

It was quite difficult though because all of a sudden someone else is ‘the man’.

It’s not an easy process to do and that’s why most people don’t do what I did, they just keep on going or they get sacked – one of the two.

The way I describe it: I wrote my own epitaph and then I shot myself.

That’s what I did with Zenith.

I just needed a change and I’d done all the things I’d wanted to do and actually I had a team that were better suited for the task ahead of the company.

They were going to do a better job than I was going to do and I was still going to be a shareholder and get the benefits of their vision and their hard work, so sometimes you hand the reins over and that’s what I did.

I wanted to do other things; I just thought I’d try something different.

I enjoyed my time at FMG because I could make things happen quickly.

I didn’t have to explain myself to anybody. It reminded me of how I used to enjoy Zenith.

If I’m being totally honest I enjoyed Zenith in the early days most because I could do what I liked, how I liked to do it, and I didn’t have to go and ask somebody.

They put a huge amount of money in and they want to know why you want to do stuff and you don’t just say, ‘Well, I want to do it because it’s a good idea’.

I’m a small shareholder and advisor to Synergy Automotive.

Do I see that broker world morphing and changing and becoming much more important? Absolutely.

That market is going to consolidate. You’re going to end up with fewer brokers and much more sophisticated operations that will, in some ways, rival the leasing companies.

Some of them will morph into much more direct providers themselves and Synergy will be one of them I think.

Being executive chairman of Essential Fleet Services is not without its challenges.

We’re probably going to go backwards before we go forwards.

We’re bringing in new team members as we speak, who will hopefully play a big part in growing a business, consolidating and developing a professional forward-looking business.

Being an executive chairman should be a temporary thing to allow the business to move at a quicker rate than it would ordinarily look to do.

The Roman Empire used to create dictators for a year, an imperator, if there was an emergency and that’s a bit like what an executive chairman is.

What I will not be is a serial chairman.

You get some guys who chair about six or seven companies. That doesn’t interest me at all.

Next, I can see myself morphing into a manager role.

And in the future I’ll never go back to playing on a pitch because you lose the yard, the pace, you lose the touch.

It’s all there in your head but you can’t do it on the pitch because you’re up against people who are generally hungrier, fitter and stronger than you are, so what’s the point?

You’ve got to play the game that you can play.