Volvo takes retail-ready cars off the end of the production line then adapts them to needs of police forces in UK and worldwide. Andrew Brady reports 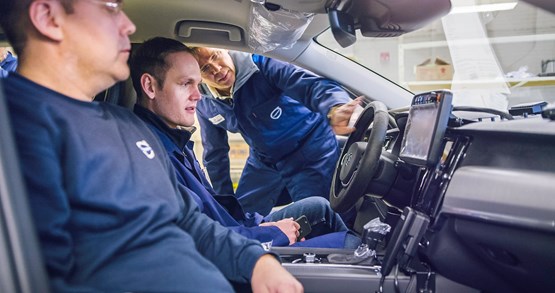 Police fleets operate at the extreme end of vehicle management. Every type of fleet operation faces the challenges of minimising breakdowns, portraying a good business image, reducing the risk of accidents and keeping drivers happy – not to mention controlling costs.

But nowhere is this more pronounced than on bluelight fleets, where cars aren’t just used around the clock, they are also expected to cope with high speeds, carry heavy gear and even be tough enough to make tactical contact with other vehicles.

Volvo has been providing police cars worldwide since 1929, but it wasn’t until the mid-1990s that the Swedish saloons and estates became a common sight on UK motorways. In a time before budget cuts and the spread of average speed cameras, pairs of traffic officers patrolling in Volvo 850 T5s frequently struck fear into motorway drivers who refused to obey the law.

“Sweeping up following incidents is carried out by Highways England.”

Reger is the man responsible for sourcing police cars from Sweden and selling them to police forces in the UK.

“A lot of the patrol cars tend to be unmarked. That’s been a major change, particularly in traffic enforcement, with a move away from the visible Volvo,” he says.

“Another big growth area has been armed police. Armed officers have exacting standards about the kind of vehicle that can do the job. It needs to have a one-tonne payload, perform at speed, stop at speed. It’s a different set of demands… police are the only motorists allowed to go in excess of the speed limit on a regular basis. When it’s an armed response, they’re also carrying 700kg of additional equipment.”

So, how does Volvo prepare its cars for police work? We visited the manufacturer’s special vehicles department, close to its production line in Torslanda, near Gothenburg. Here, staff are preparing V90 and V90 Cross Country models for bluelight work.

They take retail-ready cars from the end of the production line and begin the process of turning them into vehicles capable of police duties. One of the biggest changes is to the suspension, where bespoke springs and firmer dampers are fitted to cope with the extra weight carried by traffic cars.

By the time two traffic officers take a seat and all their equipment is in the boot, a V90 will typically weigh around 2,400kg – around 600kg more than the standard car.

The steering remains “more or less the same”, and you might be surprised to discover the standard D5 turbodiesel engine remains untouched under the bonnet. With 235PS and a 0-62mph time (in the standard car) of 7.2 seconds, it’s quick enough for most police pursuits, while also being relatively economical. It returns official fuel economy of 57.6mpg and emits 129g/km of CO2.

“One of the big changes we’ll start to see over the next couple of years is the switch back to petrol,” says Reger. “Traditionally, we supplied the T5, then moved to diesel, with police vehicles being diesel-only over the past eight years. Suddenly diesel is seen as poisonous, so there’s going to be a change.”

Volvo is set to introduce a T8 ‘twin-engine’ hybrid powertrain to its V90 in the near future, and it already has an XC90 T8 police demonstrator. It’s fair to assume, then, that a V90 T8 police car is likely.

“There’s a lot of pressure on air quality in London and other major cities,” adds Reger. “Police, ambulance and fire are at the top of the list to cut down on diesels. Hybrids are seen as an opportunity. Operational requirements are such that response times are key. If a hybrid can fulfil that role, then it will.”

Volvo is known for its excellent safety record, which is partly why its cars are popular with police forces. If your employees spend all day in their cars and regularly (legally) exceed speed limits – sometimes going well into three figures – it’s important they’re in the safest cars possible.

Safety-related modifications for police V90s include a steel net behind the rear seats to act as a barrier between luggage in the boot and the car’s occupants. Think of it as a hardcore dog guard and you’re on the right lines. Along with this, a bespoke boot frame has been designed to cope with extra luggage weight. In the case of a rear-end crash, it’ll break and push its contents out through the rear window, rather than forward into the passenger compartment.

For Sweden, Volvo is unique in offering ‘off-the-shelf’ police cars, right down to the blue lights, reflective decals and radio.

It stops short of carrying out this level of completeness for the UK, however – instead, doing the heavy preparation work before selling cars to individual forces who then commission third-party converters to make the finishing touches.

One of those third-party converters is Liverpool-based company Jack Hodson. It offers various bluelight packages as well as bespoke conversions for forces across the UK. While it is able to convert standard production cars into police cars, it is contracted to put the finishing touches to Gothenburg-built Volvos in the UK.

Sales director Peter Hodson explains that this might not be as simple as you’d expect.

“A lot of time is spent predominantly dealing with the cockpit,” he says. “You don’t want things in there that are going to obstruct an airbag’s deployment. Everything you do requires keeping away from safety features.

“Cars may have curtain airbags, for example, and you can’t run cables across them.

“A lot of our time is spent designing rather than simply building. When we’re doing a design for the cockpit area, everything has to be within easy reach, but not where it would be a distraction for the driver.”

Hodson explains that Volvo allows his company early access to vehicles – he’s been working on an S90 for a couple of months.

“I’m looking forward to getting stuck into the V90,” he says. “It has excellent weight capacity and is built in such a way that makes our installation easier. It’s well-built, robust and has more space for us to use.

“We have some exciting innovations planned for the V90 in time for this year’s exhibition season.”

Ahead of going on sale, Volvo has spent more than 500 hours testing its V90 and V90 Cross Country police cars in a variety of conditions – from well below freezing in the Arctic Circle to extremely hot temperatures. It’s all live, with no simulation.

Volvo says if the vehicles can handle this, they can handle anything. Reliability is obviously a huge concern for police – especially as, in the UK, budget cuts means smaller forces are holding onto traffic cars for as much as five years.

Swedish police have already tested the V90 and given it a rating of 9.2 out of 10 – the highest score ever awarded. That’s across five areas: a brake test, obstacle course, evasive action tests with and without braking, plus high-speed emergency driving.

Volvo is hoping to get the V90 on the crown commercial service agreement later in 2017, which will allow police forces to place orders.

With the V90 already proving popular with fleet and retail buyers, as well as the Swedish police, it’s hoped it will follow the V70’s success with police forces in the UK.