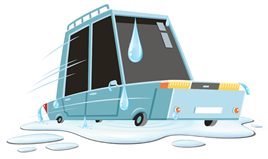 Getting the most out of vehicles over a longer period of time can help a company optimise its fleet utilisation.

Pressure on fleet budgets and a desire to optimise vehicle utilisation has led to an increasing focus on making vehicles work longer, harder and smarter.

This has seen replacement cycles lengthen, while many fleets have also looked to make savings through reducing the size of their vehicles without harming their operations.

Research this year by the Corporate Vehicle Observatory Barometer found the average replacement cycle had increased during the past 12 months, with 21% of UK fleets operating cars and 25% operating vans keeping those vehicles for longer.

For fleets with 40 or more vehicles, car lifecycles are increasing for 23% of companies and 25% for vans.

However, simply extending the mileage or length of time for which a vehicle operates is not necessarily the best way to run an efficient fleet.

“For company cars, you need to ask whether you are striking the right balance between the most cost-effective mileage and the term of the vehicle,” says Wayne Millward, fleet consultant at Arval UK.

“Shorter lease durations are great from an employee perspective and help with recruitment and retention of staff, but are often more expensive.

“Also, are you making the most of breaking technology that will deliver lower CO2 emissions and enhanced safety? What impact will these have on lease rates? Sometimes, vehicles containing new technology can be cheaper over a three-year cycle than over four.”

Vans pose additional challenges. “Consider whether they need to carry the loads they have in the past,” says Millward.

“Are there more suitable new vans coming to the market or enhanced, lighter racking systems? Are you rightsizing your LCV fleet? Can racking be recycled and second-lifed? All of these questions should be tackled.”

Following the 2008 financial crisis, Stannah looked to sweat its assets after putting a hold on capital expenditure.

As part of this, Martin Carter, operations director at the lift and stairlift manufacturer, used a scatter graph to determine the optimum time to replace cars and vans.

On this he plotted every vehicle with the graph displaying cost data against the age/mileage data in order to find a correlation.

In Stannah’s case, the graph revealed that five years/120,000 miles was the optimum time to change both cars and vans; if it kept the vehicles any longer then it risked maintenance costs spiralling out of control.

“It’s not something we continue to do as a routine,” says Carter. “The economy just prior to then was in poor shape and we had placed a freeze on capital expenditure, extending the life of our vehicles. This was part of an exercise to decide how we proceeded.

“We now use wholelife cost to determine replacement cycles and the scatter graph is useful to understand how and when actual SMR cost can start to drift from the theoretical.”

Enforcement agents Bristow and Sutor purchases its cars and vans outright and keeps them for their entire life.

“We’ll take cars from brand new to 160,000-plus miles and vans to 250,000-odd,” says Andrew Wearing, fleet manager at Bristow and Sutor. "I don’t get any more issues with those vehicles than with new ones. Because we tend to buy the same sort of vehicles, we know the potential problems so can forestall those before they arrive.”

However, while many fleets run fixed replacement cycles without regularly reviewing them, fleet management software provider Chevin Fleet Solutions warns there is no “one-size-fits-all” approach based simply on pre-defined age and distance.

“Rather than implementing a fixed vehicle replacement cycle across the fleet, they should also look at a wide number of parameters such as operational measurements,” says Ashley Sowerby, managing director of Chevin.

“In other words, by interrogating an individual vehicle’s data, managers may find that some vehicles are best replaced after a different period.

“This type of enhanced vehicle replacement forecasting involves fleets assessing data about specific vehicles, in order to identify inefficient and costly vehicles for disposal or  to retain vehicles that are performing more efficiently.

“We have had customers that have saved 23% on overall running costs over three years by adopting this kind of flexible vehicle replacement cycle policy.”

While it is important to determine the optimum car or van lifecycle to help a fleet run as efficiently as possible, for van fleets, selecting the correct size of vehicles can also make a difference.

Typically, the smaller the van, the lower the costs, but acquiring a van that is not large enough for its intended job can be a false economy.

“In the not-too-distant past, vans only came in two or three basic sizes,” says Millward. “Today, there is a huge choice of shapes, styles and payloads.

“Running the right size for your particular needs can deliver much better utilisation, especially if you are currently using larger vans than required.

“Recent work for one customer has seen a wholelife cost saving of around £3,000 per vehicle and a 10% CO2 saving by following this strategy.”

Mark McKenna, director of fleet insurance broker Bluedrop, adds: “Don’t over-specify on an ‘every-so-often’ basis, such as the odd need for a six-seater vehicle. Look to cater for your most common needs.

“If something extra is required on odd occasions then such transport could be outsourced and hired on a rental basis, rather than purchasing something bigger and less cost-efficient that will simply sit in the car pool.”

A review of its van fleet enabled Britvic to replace its Volkswagen Transporter vans with smaller, cheaper-to-operate Caddy Maxi models with no drop in service levels.

The company, which has 91 vehicles on its fleet, had operated 40 Transporters with the remainder being previous-generation Caddy Maxis.

“Part of the review was to look at what vehicle was right for the role,” says Simon Mohun, regional technical service manager for Britvic.

“Together with Lex Autolease, we looked at the cost of the vehicle, its cubic capacity, reliability and network availability. We also did an analysis of what stock we needed to carry, as well as looking for the best racking provision which would allow us to operate effectively.”

Britvic narrowed the choice down to three vans and three racking systems, and then trialled them.

“We’ve got 100 drivers across the country and we couldn’t get them all to try the vehicles, but we had at least two people from each of our 10 teams trialling them,” says Mohun.

“Their feedback was key: they looked at reliability, driver comfort and how the racking worked for us.”

The review also led Britvic to remove a collective 2.4 tonnes of weight from its vehicles by redefining its stocklist.

“We found that the amount of stock carried by drivers would grow over time and many had more in the vehicle than we recommended,” says Mohun. “We introduced more rigorous checks of vehicle stockholding, so we are replenishing them more frequently, but we are carrying less and are more disciplined about what we carry.”