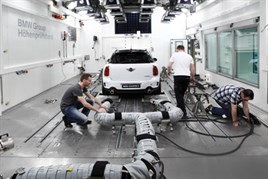 Petrol and diesel versions of a new three-cylinder engine are set to go under the bonnet of every compact car built by BMW in the next 18 months.

It may also appear in the 3 Series.

Built at Hams Hall, Birmingham, the motor will register significant benefits in operating costs compared with the units it will replace.

“We expect fuel economy to be better by up to 15% and our CO2 figures should improve by the same level,” said BMW powertrain chief Bernardo Lopez.

“This is an important step forward and we think it will broaden the appeal of our cars. It should also be a particularly attractive prospect to business users who are looking to reduce their operating overheads.”

Best performance for the current 1 Series are 74.3mpg and 99g/km CO2 for the 116d. BMW is reluctant to make like-for-like comparisons, but a 15% improvement here would result in figures of 85mpg and 85g/km.

Speaking as Fleet News was among the first to test a prototype of the engine, Lopez added: “It is a major part of our EfficientDynamics programme and will underline our position as the industry leader in engine manufacture.”

Derived from the group’s award-winning six-cylinder racing engine, the TwinPower Turbo makes use of up to 40% of its components in either diesel or petrol form, making it less complex and cheaper to manufacture.

The breakthrough paves the way for greater production flexibility that should allow BMW to respond faster to changes in demand from markets and customers.

Initially available in i8, the first plug-in hybrid from the new BMW i sub-brand to be launched early next year, the engine can be used in front or rear-wheel drive configurations and will begin replacing the power units in the group’s traditional 1 Series and Mini ranges soon afterwards.

Designated as the group’s new entry-level motor, the TwinPower Turbo output will range from 122hp to 204hp in petrol form and deliver between 82bhp and 184bhp as a diesel.

All versions will have the choice of six-speed manual or eight-speed automatic transmission.