Dale Eynon: ‘If we don’t find solutions, the Government will’ 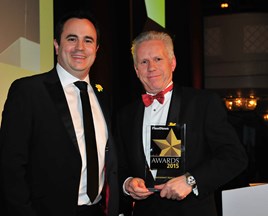 Environment Agency is devising a NOx reduction strategy to ensure it mitigates its impact on air quality.

The public sector fleet has been transformed in recent years, with annual mileage being slashed by an astonishing 15.5 million miles (30%) in the past 10 years.

However, with air quality the subject of a consultation being organised by the Department for Environment, Food and Rural Affairs (DEFRA) and the scandal engulfing the Volkswagen Group, NOx is the next big thing for the agency’s head of fleet operations, Dale Eynon.

“We’ve asked our contract hire provider Hitachi Capital to set ourselves some NOx reduction targets,” he explains. “For the next five years, between now and 2020, we want to have some clear targets to ensure we’re ahead of the curve.”

Environment Agency has already achieved a 65% reduction in NOx over the past seven years, partly because of its focus on reducing CO2 emissions.

However, Eynon wants to continue cutting the pollutant, with current Euro 6 NOx engines as his starting point and a plan to drive them down even further.

“It is one of those issues where if fleet does not come up with solutions, we’re going to find the Government implementing measures instead,” he warns.

Fleet News: Has the environment moved up your fleet agenda over the past few years or, given the department’s remit, has it always been a priority?
Dale Eynon: It’s always been a priority – it’s in our DNA – and we expect our suppliers, particularly our vehicle management suppliers, to help us achieve our targets.
We’ve always wanted to be ahead of the curve in terms of carbon reduction. We set ourselves a target for our car fleet, for example, to have an average of below 100g/km by March 2017.

FN: Is that achievable? Does that mean you have to heavily restrict choice?
DE: Yes it is achievable. We’ve just hit it for new cars and, overall, we’re averaging around 107-108g/km. In the past three-to-six months, there has been a much bigger variety of plug-in hybrids available and for the first time we’ve put some pure electric on our choice list. CO2 is also generally lower, year-on-year, and we’ve selected manufacturers that go that extra mile and have very low CO2 product.

However, for people who wish to go for pure electric (EV) or a plug-in hybrid as a company vehicle, our vehicle management company tests their suitability, including whether we will be able fit a charging point at their home. It’s only when all of their answers meet the requirements that they can order that vehicle. It’s important because we want to avoid the so-called ‘green wash’, where people think they’re doing the right thing but they’re actually missing the point.

FN: Is it vital to have the support of suppliers in trying to fulfil your environmental objectives?
DE: It’s an absolute must with our vehicle management provider. We’ve been with them for a while now so they really understand . However, when you’re trying to get the greenest cars on your fleet, stuff like daily rental can prove to be a real challenge.

What we’re beginning to look at is more of a mobility solution, because we have pool cars that are unused during the evenings and weekends. That seems like a bit of a waste. We could instead have a car from a daily rental provider effectively 24-7, which during the day is hired out through an internal booking system and then it could be hired out during weekends and evenings to help offset our business costs. We’re hoping to implement a scheme within the next six-to-12 months.

FN: What’s more important, the vehicle or the driver when it comes to mitigating your environmental impact?
DE: Probably the driver, because where the technology is concerned we can solve issues relating to the vehicle, but with the driver it’s harder. We’ve spent a lot of time and effort with our drivers.

We’re in the process of installing telematics across our commercial fleet and are hoping to extend that into our car fleet as well. Up until this point, we’ve been using softer techniques to change driver behaviour, such as a ‘travel hierarchy’ that encourages employees not to drive unless they absolutely have to.

We also monitor our driver incident rate in terms of repeat offenders, but telematics will give us much more insight and help us identify those people who are not performing as well as others in their driving style.

FN: Which one measure you have introduced has brought you the most success in terms of delivering both environmental benefits and cost savings?
DE: Telematics in our commercial fleet will bring massive benefits, once fully implemented, with a return on investment expected in the first 12 months just on fuel. Trials have shown us an 8-9% worst-case saving, and it could be as high as 10-12%. Then there are the SMR reductions and the reduction in incident rates. So we think telematics will be a big game-changer for us with the commercial fleet.

On the car fleet, I think it’s a combination of vehicle selection and being innovative with new technology, while tackling driver behaviour. However, I think there’s less of a silver bullet where the car fleet is concerned.

FN: How long ago did you start looking at telematics and when will it be fully implemented?
DE: It started around two years ago. We conducted a trial for between six-to-eight months to see how it would work and the benefits from a safety perspective, as well as an environmental and cost perspective, were very good. That led us to develop an operating model, a tender and then an implementation programme.

Going forward, ultimately if we get the improvements we want I’m not sure we would want to keep them in our vehicles forever. We might move to a model where we fit them as and when we need them.

Once we get that initial driver change hopefully it will  stick, but actually it’s about how much vehicle data we want to collect.
It will change, especially with the likelihood of manufacturers fitting the technology in their vehicles in the future.

Eynon also assessed the size of the van that would be most suitable for each type of business operation, completely changing the Environment Agency fleet profile. Before the programme began, around 70-80% of the vans were 3.5-tonne vehicles; now 60-70% are smaller vans. The fleet utilisation programme alone has resulted in a 10% cost saving, with smaller vehicles further boosting savings due to lower costs.

As a result of this success, DEFRA’s fleet programme is now also being brought under the stewardship of Environment Agency. Against a backdrop of cuts, a pooling of services is expected to drive further efficiencies.

However, while Eynon has enjoyed a great deal of success, he says there have been initiatives which haven’t delivered the savings he envisaged.
He explains: “We tried speed limiters in a number of our vehicles and in most cases the savings were really marginal, but in some cases it was actually worse.”

Fleet manager of the year
“Dale Eynon shows strong  leadership, driving forward  one of the most diversified fleets in  the public or private sectors, with cars, vans, trucks, plant and even boats under his responsibility. He has the skills  and passion to achieve great things in his fleet, and has influence at government and local level. Dale has achieved major savings, pushing forward efficiency plans to make his fleet one of the safest, most effective in the UK.”

Green fleet of the year
“Environment Agency has worked tirelessly to drive the values of the organisation across its fleet operation.  It offers a complete green solution  with policies looking at every possible option to reduce its impact on the  environment. The business, and its head of fleet Dale Eynon, also influence other organisations, promoting the green message within government and beyond. Deserved recognition for an  environmental leader.”