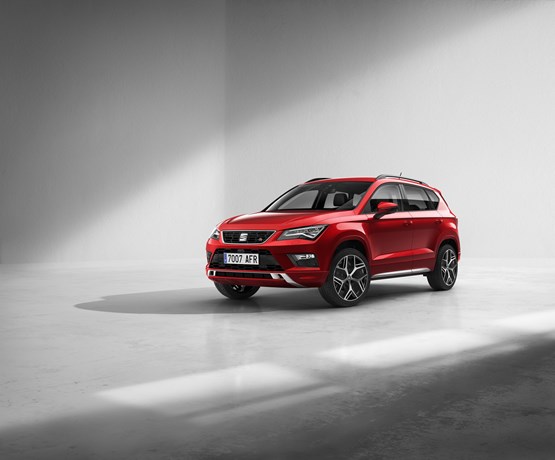 Seat has set its sights on challenging the likes of Honda, Hyundai and Volvo in the fleet market after posting its best year for true fleet sales, (9,856 units last year, up 15% on 2015, according to Seat’s measurement).

Head of fleet and business sales Peter McDonald believes the brand could reach 12,000 fleet sales in the next 12-18 months.

His logic is that Seat achieved growth last year with only a small contribution (approximately 300 units) from its first SUV, the Ateca. Seat took around 1,000 fleet orders for Ateca last year and has started this year with an order bank double that at the start of 2016 and overall sales of 3,974 in Q1 (1,835 better than Q1 2016).

McDonald says: “If we’re able to get to 12,000 sales we would be in the position of not just moving one ranking up. We would potentially be 15th in the market rather than the 20th of last year.”

But he is keen to stress that 12,000 sales is an “ambition” rather than a “core target”. Seat’s business plan this year is to maintain sales year-on-year, taking into account that the market is likely to drop.

Seat is also extending its four-day test drive programme – which proved popular with the Ateca – to all models (fleetnews.co.uk, March 21).

Product has a big part to play in future growth with the facelifted Leon now on sale, followed by a new Ibiza, which will be available to order in May and will be at Company Car in Action in June.

The brand will also launch its first compact crossover (Arona) in the second half of this year, followed by a new large SUV (which will be available as a five or seven-seat version) next year.

Fleet News: How has the launch of Ateca benefited the brand?

That all changes with Ateca. That is the third biggest segment in the market, in true fleet, and last year it was the fastest growing. People, whether they are user-chooser or business-need fleets, want that sort of car so it makes it much easier for us to build relationships and build leverage and improve the quality of those relationships to the point that Ateca hasn’t substituted any sales. Ateca coming in hasn’t meant we’ve stopped selling Leons. It’s done the opposite, it’s helped us build and bring new customers to the brand.

FN: How much interest have fleets shown in the petrol Ateca?

PM: Last year we were seeing close to 50% petrol mix and that probably hasn’t changed much.  A lot of that was the 1.0-litre TSI because that works particularly well in public sector channels. It’s a lower output engine but it’s not a compromise. It’s lower benefit-in-kind and good wholelife costs so when individuals are doing their own sums they are saying ‘I might opt towards petrol’. Unless drivers are doing significant mileage, petrol works.

FN: What are your average lead times?

PM: Both petrol engines did have longer lead times, but we’ve been working hard with our factories to calibrate petrol production to demand, and it’s improved. We have been ending what was the previous Leon and introducing the new one which caused some extension but that’s now normalised. Alhambra is a little bit longer because it has had an incredibly successful year to the point where it’s been difficult for production to meet demand but that will normalise because we’re increasing UK allocation. Everything else is normalised.

We have a national pool of stock so if a dealer orders a car for stock purposes or we order a car it sits in the port in a common pool. We purposely do that to make it accessible for fleet. We know that if a car gets down to a dealer site it’s quite difficult to make available and for the right dealer. Once the cars are held at national port stocks, if a fleet really wants 10 Leons all in the same colour for delivery in the next two weeks we’ve got capability to deliver on that because our cars are held in one location.

FN: What are your fleet sales expectations for Arona?

PM: It’s relatively small volume this year because we only really get supply for December sales but it will be an important order take car for us. Residual value influencers have seen it and they will get to drive it midway through the year which will help them set RVs so we’d like to be able to take orders at the back end of quarter three.

That segment is probably a bit more retail-orientated but I think it’s going to be an important car for us from a growing portfolio, and the fact that when you look at that segment where Ateca sits five years ago there was very little fleet content to it, it was actually a small segment. It’s grown so I’m expecting by the time we get around to launching Arona – and we’re a year in – that might be a much larger segment of the market.

FN: Last year you consciously reduced rental and achieved growth in Motability. Do you expect the same this year?

PM: We will probably now stabilise our rental volume but our order bank is significantly up in Motability. We really like Motability from the point that they are three-year cars so they are long cycle and they’re serviced through the dealer network so they are good used cars whereas rental is a shorter cycle and can have detrimental impact if over-supplied.

FN: Why did you decide to launch four-day test drives?

PM: We’re all conscious that fleet customers don’t always get the best experience when they visit a dealer. I don’t think it’s a Seat brand issue, I think it’s an industry problem. So our approach is let’s make it really easy for a fleet customer to access one of our cars. They don’t have to go into a dealership, we’ve got a dedicated phone number and website and they can book a four-day test drive and we’ll deliver the car to their home, when it’s convenient for them. And it’s not overnight, they’ve got it for four days. That has worked really well for Ateca and we’ll continue to do that.

McDonald acknowledges that a four-day test drive may not result in “an immediate sale” but it has an important part to play in getting Seat onto choice lists.

He expects to win further small business sales through Seat’s local fleet business development programme, which launched in 2014 and is additional to Fleet Excellence. It provides £25,000 support a year to dealers that have a dedicated Seat local fleet manager prospecting and managing small customers in their area.

McDonald does not expect the programme to expand beyond the 25 dealers currently in it as that “covers the majority of local fleet opportunities”.

It will be possible for a dealer to be both a member of Fleet Excellence and the local business development programme, provided they meet the criteria.

Seat won a number of major corporate contracts last year and McDonald wants that to continue.

The public sector is also being targeted with the appointment of Justin Costello as national fleet sales manager. Costello was previously contract hire and leasing manager at Seat and replaces Jason Coleman who left the business last year to join Northumbria Healthcare NHS Foundation Trust.