South East Coast Ambulance Service: ‘Telematics will change the culture of the organisation’ 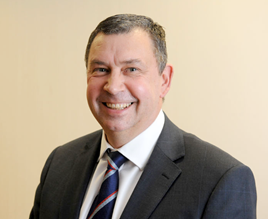 The pressures of operating an emergency service around the clock are immense.

John Griffiths, head of fleet and logistics at South East Coast Ambulance Service NHS Foundation Trust (Secamb), is comparatively new to the organisation’s fleet department, but he’s no stranger to the demands placed on its vehicles, having previously been head of operational support, looking after areas such as driver training and standards.

He took over the fleet last summer from Justin Wand, who is now at London Ambulance Service. A trained paramedic, Griffiths spent the first few months taking stock, and is now ready to start applying what he has learnt from an operational viewpoint into fleet policy and direction.

The trust itself has seen several changes to process over the past decade, including the gradual conversion of ambulance stations into ‘make-ready centres’ – the first of which opened in Chertsey nine years ago.

Fleet News: What benefits do make-ready centres have?

John Griffiths: Each of the 12 make-ready centres has a vehicle workshop, so, if maintenance is needed, the vehicle doesn’t have to travel and face downtime. It comes in at the end of the shift, is cleaned, and given to an on-site technician for any issues. It increases the speed at which the vehicle can be repaired and reduces mileage.

It means these technicians feel a real part of the team and understand better the day-to-day operational pressures faced by the service. The perfect make-ready centre is one which the paramedics go to in the morning, the ambulances are there, the technicians are there and engineering and medical stores are all on site.

FN: How else does this concept improve efficiency?

JG: The paramedics come in, pick up their vehicle and go to a cover point in their local area. This is a point designed to be close to areas likely to face a ‘red one’ high priority call. It could be a shop, a fire station, or a community centre.

Historically, an ambulance station may not have been in the best location to serve incidents, and the new process means we can strategically position our team, and use the savings by closing the ambulance stations to reinvest in the make-ready centres.

It also improves the speed of response, and reduces our fleet mileage. Our crews are proactively in the right place, close to the incident, and not having to travel out from the hub for each incident. Putting crews within four miles of a job instead of seven cuts the response time and removes three miles of travel. Our paramedics are so well trained and equipped now. An ambulance no longer just gets someone to hospital, it enables serious healthcare in the field.

FN: How are other new systems improving your fleet?

JG: Three elements of our vehicle systems are being developed with three partners – Wilker, the converters; Ferno, which provides the integrated patient transport system (stretchers and racking); and Along Track Scanning Radio-meters (ATSR) vehicle control systems, including telematics.

Instead of having cupboards in an ambulance we now have racking. This means you can bolt on and off medical components instead of stowing them inside a box that may, in the future, no longer be the right fit. The new stretcher system means we don’t need tail-lifts, saving £5,000 per vehicle, and taking 250kg off the weight.

If all these systems were rolled out to every vehicle, we believe it will save £10 million over five years.

The patient transport developments are in progress – we have a couple of vehicles with all these systems which we’re testing to ensure they are fit for purpose before a full roll-out.

FN: How does telematics work in a bluelight environment?

JG: Every driver will log in with a swipe card, so we can track both the vehicle and the driver. We can work with our driver training team to help improve driving issues. Also our workshop teams can undertake preventative maintenance on vehicles showing heavy use.

We’ve been operating speed limiters on our vehicles, set at 62mph. As soon as the 999 button is pressed, those are removed and the vehicle is unrestricted.

The limiters have already shown fuel savings of £600,000 a year, which we can reinvest in the organisation as a whole.

When the telematics roll-out is complete (currently 75%), I would love to remove the limiters and allow education to lower speed, instead. That will change the culture and behaviour of the organisation.

We’re soon to appoint a driver standards manager to work within the fleet team. The manager will analyse and interpret the data from telematics and work with our driver training team to act on the findings.

FN: Does your fleet use in-cab cameras?

JG: We’ve fitted forward-facing cameras for around three years on all new vehicles, and the drivers are really pleased. We’ve settled insurance claims quickly with the footage, and in several cases where our crews believed they were in the wrong, they were exonerated. It’s reduced our insurance premiums and claim costs.

FN: What else have you done to reduce accident claims?

JG: Our fleet covers 17 million miles a year, and we believe one of the easiest ways to reduce accidents is to reduce our mileage. We’ve sent managers on investigation courses to better understand the cause of accidents, and have been running a driver education programme.

Our demand is going up by thousands of jobs a year. If we can maintain the mileage, even though we’re doing more jobs, that will help our efficiency.

FN: As green fleet of the year, are there any specific initiatives that you are proud of?

JG: When our crew pulls in, the vehicle is sat with all the systems on, requiring a good auxillary battery. If the vehicle is not moving and not plugged into a shoreline, it trashes the battery. We have to replace a number of these a year, meaning more downtime, so we’re now introducing a small solar panel array to the vehicles to provide a trickle of power to them. It reduces pressure on the crews to plug in, massively reduces damaged shorelines, and provides green energy to charge the battery.

FN: Are there any projects on the horizon for you soon?

JG: I want to look at replacement cycles of our fleet. At the moment, we have some vehicles up to 11 years old, and I want to bring that down. Introducing a gradual replacement cycle, where a vehicle is replaced every other week, instead of introducing a large batch at once which had historically been the case, is one of my priorities.

It’s testament to our teams that these vehicles are still maintained exceptionally well, in good condition and performing frontline duties, but their replacements are due.

Despite the full telematics and patient stretcher system roll-out being already underway, it’s likely the public sector body will face further financial pressures in coming years. Griffiths is keen to continue to innovate to ensure the fleet remains fit for purpose and within budget.