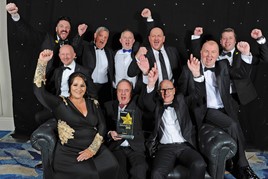 Taking the crown as Fleet Dealer of the Year at this year’s Fleet News Awards for the third time is testament to TrustFord’s focus on continuous improvement to ensure it can provide a total solution for its fleet customers.

Infrastructure, logistics, IT, people, vehicles and relationships with leasing companies, end user fleets and suppliers are all areas of constant focus for the dealer group’s Scottish fleet and commercial vehicle director Mark Wilkie.

With development in so many areas of the business it’s led Wilkie to say to the fleet market: “Bring us your problems and we’re committed to resolving them.”

And the market has taken heed. Last year TrustFord’s fleet operation had a record year, with a 20% volume increase, despite Brexit and emissions regulation uncertainty. And volumes were up 20% year-on-year in Q1 in 2019.

The business had just opened a 10-acre pre-delivery preparation centre at Sherburn in Elmet, North Yorkshire, to support plans to grow fleet volumes this year from just less than 48,000  up to 60,000 vehicles (or 1,000 per month). Vehicle, storage, preparation and graphics functions are already operating. The site will expand to 20 acres within 18 months, possibly more. It complements the 24-acre Long Marston pre-delivery inspection (PDI) centre which opened in 2017.

When both are operating at maximum capacity they will be able to PDI 50,000 vehicles a year, using an electronic delivery system developed in-house, which will barcode every vehicle.

Fleet News: How does the physical growth of TrustFord at Long Marston and Sherburn make a tangible impact on fleet end-users and leasing company customers?

Mark Wilkie: Uniquely for a dealer group we have 77,000 sq ft of internal space at Long Marston allowing us to do 100 PDIs per day, plus 40 bays available to third-party vehicle convertors. We can reassure fleets that we can manage the entire preparation process in one place, under cover. It’s unprecedented in its efficiency and we insist on – and maintain – rigorous standards.

And, because we store 5,000 vehicles on that site, their availability means we can get a call from a customer needing 20 vans in 48 hours in Glasgow and we can turn them around. The process is all in our control, from plylining to telematics installation, racking to graphics.

We know no other business that has one site like this, let alone two. It means very often we say to leasing companies, give us the problem and the outcome you want and we’ll do the rest. And we’re winning reciprocal business from our third parties as a result of our efficiencies.

MW: We did just under 48,000 vehicles last year in fleet and commercial vehicles (CVs) and expect at current run rates to break 50,000. We have a few major opportunities under way at the moment which, if we can turn them around, would make a significant difference.

FN: What impact does such volume growth have on the business and on your ability to always meet customer demand?

MW: Our volumes represented 48% of the group total last year. Fleet is massively significant to TrustFord. Given we consistently deliver that sort of volume, it is a fairly reliable part of the business, with positive customer feedback.

We built our team more than four years ago and, with few exceptions, there’s been little personnel change. So, for customer relationships and confidence we are very stable, particularly with big national accounts that take two or three years to win. With volume growth we work hard to maintain the quality of business.

FN: You developed your own logistics and PDI portals, what’s next for system development to support customers.

MW:  This year we’re creating our own internal fleet management system as we believe there isn’t an off-the-shelf solution for the volumes we do. It will be an evolution of what we have already and will be linked to the other two systems. The new portal will allow us to manage the whole process from initial enquiry through monitoring the vehicle order, its progression from factory to prep, and third party work. It’s really (as Americans might say) soup to nuts. There will be no customer-facing aspects at launch, but this could evolve later.

The system is due by the end of this year. The automation provided means we will be able to do tomorrow’s volume with today’s resource.

FN: Mobile servicing was a focus last year. How has this developed?

MW: Our chairman has an absolute focus for us to run 50-60 mobile servicing vans as a fleet support function. A lot of fleets’ first objective is to minimise downtime and, as part of our aftersales offering, this is the only solution that matters for some fleets: enabling the service of more than one vehicle at the same time, working particularly well in London where two of our technicians getting to the customer’s site is incomparably better than the downtime associated with six or seven of their drivers getting to us.

We see mobile servicing as a fundamental support to our fleet business. We have 20 vans, but we’re constantly in discussions about introducing more. The number will expand dramatically in the next 12 months. Ford of Britain wants the dealer network total to reach 200.

FN: Has Brexit confusion had a  tangible impact?

MW: From a volume and order perspective we didn’t see any impact. But, in March, the potential for a hard Brexit or one that included introduction of tariffs meant there was a question mark over the status of a number of vehicles right up until the end of the month. We had to act for the first time in response to the political situation by building up UK stock to mitigate the impact of a harder Brexit. It’s hard to speculate what the final result will be in October, but we’ve stepped back from it being an immediate need to address.

FN: How has the new WLTP testing regime impacted you and your customers?

MW: There are two separate issues at play – cars and commercial vehicles. For cars, we are in a good place with new product and engine last year. For the whole market, some fleets are holding off ordering until accurate comparisons can be made because of the possible impact on company car drivers’ BIK. With CVs, we’ve got until August to acknowledge WLTP, but there aren’t the same emotional BIK implications. We need to ensure we have adequate stock before and after August, but we have launched Fiesta van this year, a drivetrain and connectivity upgrade on Custom and new facelifted large Transit.

FN: Ford’s announcement on its commitment to hybrids is significant – eight EV models this year. What will be the impact on TrustFord’s fleet operation?

MW: It will mean Ford leapfrogging some manufacturers in terms of what we can offer in the car and CV ranges. The CV EV range will then massively expand beyond 2019. So we’ve already had significant discussions about hybrids. A number of existing fleet partners are looking to move into that market.

Market share forecasts aren’t possible as a lot of fleets are still crunching the numbers on what will work for them.

But some all-diesel fleets may experiment with a batch of hybrid or a have a mixed application where hybrid is appropriate for urban use and diesel remains the best option for significant mileage vehicles. But hybrid, particularly in the weight range we can offer, up to large Transit, means diesel’s position as the only viable choice of fuel type for commercial operators might now be open to question.

The opportunity for Ford and TrustFord is significant and Wilkie acknowledged the work involved, accelerating the group’s hybrid and electric knowledge, equipping the business to maintain and charge customer vehicles that has begun in earnest.

“The introduction of EVs is probably the biggest change the motor industry has ever experienced. Everything we know is up for change,” he said.

“The infrastructure requirements – ensuring we can prepare EV vehicles and even charge demonstrators in our dealerships – must be achieved this year. And our people must have absolute understanding of the issues so we offer the best advice.

“That process starts now, even though vehicle availability is some way off, because fleets want to start assessing the options now.”

Last year’s winner, TrustFord continues to increase its support for fleets with an expanded mobile servicing offering, a growing central logistics team, significant investment in infrastructure and improved systems. The judges also praised the quality of its testimonials.