Stakeholder engagement is a crucial element to the successful introduction of any new fleet initiative. From senior management to drivers, everyone has an opinion and a vested interest when it comes to changes that affect their vehicles.

Winning their buy-in is an important first step, one that can be facilitated when the fleet manager is willing to lead from the front.

People dislike change; some actively resist it, so a mix of psychology and persuasion is just as import-ant as rules and regulations.

For Steve Openshaw, group fleet and transport manager for construction and property company Eric Wright Group, a persuasive subliminal message about a core fleet policy is delivered to employees each time he arrives at work.

Openshaw has been driving zero-emission capable vehicles for six years, covering nearly 100,000 miles, first in a Vauxhall Ampera and now in his current company car, an electric BMW i3. The i3 is fitted with a range extender that tops up the battery, if needed, between charges.

Openshaw says: “I am showing drivers what these cars can do. You get some people saying you can’t go anywhere with them, you can’t do anything, so I am showing day-to-day that you can live with them. 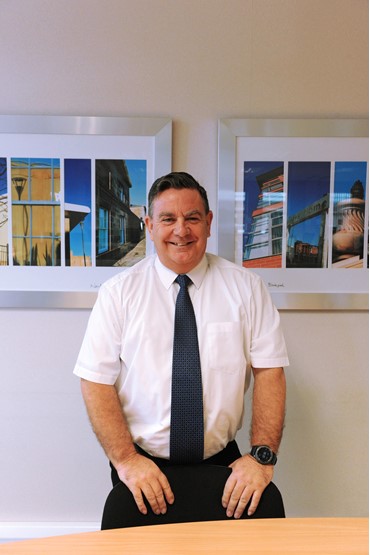 “I have covered 26,000 miles in the i3 now and I have used 19 litres of fuel. Based on what is coming to the market in the next couple of years, I will be looking for a pure electric vehicle (EV) when I come to my next change and, hopefully, we will make that available to the fleet.”

Openshaw is the only team member in a range-extender EV, but the fleet has a number of self-charging and plug-in hybrids on offer and the message is getting through, with 10% of its 180 cars now made up of zero emission-capable vehicles, a 50% rise in the past year. The balance of the car fleet is diesel.

The fleet has a core list of seven manufacturers across its vehicle grades, with ultra-low emission vehicles offered at each level, while senior managers have an open choice, with all model choices based on wholelife cost calculations.

The fleet now has five self-charging hybrids and 12 PHEVs, with premium brands the most popular choice, covering zero-emission capable versions of the BMW 5 Series, Mercedes-Benz C-Class and Lexus RX, while other hybrid models on fleet include the Kia Niro, Toyota Auris and C-HR and GTE versions of the Volkswagen Passat and Golf.

Eric Wright Group is careful to ensure that drivers who opt for a hybrid vehicle have a suitable mileage profile, so they can maximise the benefits of green technology.

Recently, experts have warned that some drivers are opting for hybrids just for the tax benefits, with no intention of running the vehicle on battery power, which harms both the environment and running costs.

Openshaw says: “A lot of the problems we have heard from fleets and fleet managers is that people aren’t plugging them in, often because they have a fuel card.

"Our policy is pay and reclaim, so if a driver doesn’t want to plug in, it will increase their fuel costs, but we won’t pay the uplift in the cost. We will just pay the HMRC rates.”

His colleague Sue McGuigan, fleet manager for Eric Wright Group, adds: “We always look at what journeys a member of staff does and whether it will benefit them to choose a plug-in.”

The business has installed five EV chargers and is looking to introduce another four next year to meet growing demand.

In the right circumstances, the benefits are clear, with Openshaw achieving more than 270mpg with his Ampera, while employees have reported fuel economy of more than 60mpg with self-charging hybrids. 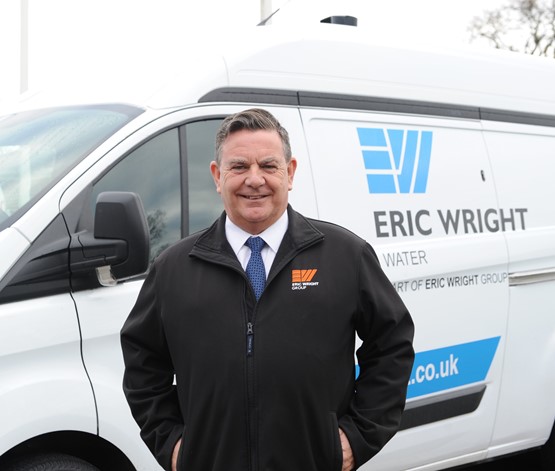 However, while the group is trying to plan for a greener, more efficient future, a lack of clarity from Government and legislative upheaval is taking its toll.

At the same time, there are mixed messages regarding ultra-low emission vehicles, with recent tax rises for most zero emission-capable vehicles and the cancellation of the plug-in car grant for all models except full EVs.

McGuigan says: “The plug-in car grant no longer being available for hybrids doesn’t help. It has really pushed some of the cars up a band now, which is not ideal.”

Openshaw adds: “Without the information from the Government on taxation, it is difficult to form a strategy. Then, on top of that, there is the fall-out from WLTP.

The combined impact of the policy changes could be counter-productive to the Government’s plans to shift to low-emission transport as part of its Road to Zero strategy, as some drivers are looking to opt out of company cars altogether.

McGuigan explains: “It is making a lot of drivers think about taking a car allowance because they can’t see what tax they are going to be paying.

“It is a bit unfair really and it is going to push them down the car allowance route; so they are going to, effectively, run a car that has probably got higher emissions than they would have for a company car.”

In other areas of the fleet, a long-term vision is possible, particularly when it comes to risk management.

Other initiatives have included driving simulator experiences during company events and ‘toolbox talks’ on key issues, such as vehicle and tyre inspections.

Telematics and dashcams were introduced to the van fleet in the past year, which required careful management of drivers to ensure they understood the potential benefits of the system and how it would be used.

The team had previously fitted speed limiters to vehicles, so they had experience of how to manage the launch of challenging policies.

They spoke to drivers about the importance of keeping them safe on the road and protecting them in the event of an incident.

Since being introduced, the system has been used to defend against bad driving claims, including providing evidence that a driver wasn’t in the area when a complaint was made, but also to support employees to improve risk awareness where errors are identified.

Openshaw adds: “There was quite a bit of resistance to it, but we talked to drivers and explained to them why we were putting technology in and what we wanted to do.

“Drivers are buying into it now because in a few instances it has assisted them in proving that they didn’t do anything wrong.”

The team also provided reassurances about who would be able to see the data.

As commercial vehicles are only for business use, there are no privacy concerns, although there is an agreement that any incident footage outside working hours won’t be used for disciplinary reasons, unless there is evidence of gross negligence.

The team would like to extend the use of dashcams to its car fleet, following the success of the commercial vehicle programme.

Openshaw concludes: “It is used more for training and guidance than discipline, just to alter behaviour and encourage culture change. You can ask why the driver thinks something happened. We have also said that if something happens, drivers will want that footage.”

Teamwork and partnership key to an effective fleet 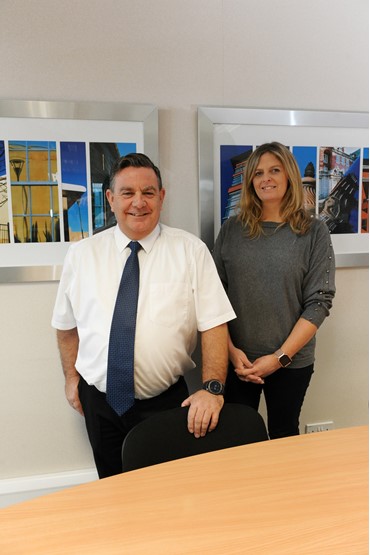 Steve Openshaw and Sue McGuigan (above) put their success on the Eric Wright Group fleet down to partnership and teamwork.

McGuigan took on the role of fleet manager 16 years ago, having previously worked elsewhere in the business during a 27-year career.

Openshaw joined to oversee the plant and transport department 11 years ago but took over strategic responsibility for the fleet last year as the number of vehicles operated by the company expanded.

“Originally the van fleet was only half a dozen vehicles and, as it ramped up, Sue really threw herself into upskilling herself. I can give guidance on that with the experience I have had,” Openshaw says.

McGuigan adds: “We talk to one another and we know exactly what each other is thinking and can bounce ideas off one another. I think we work well as a team.”

Both are members of the ICFM (Institute of Car Fleet Management as was), and fleet association ACFO and they are also Van Excellence-accredited.

Together their partnership has driven efficiencies across the fleet. Their budgeted cost per vehicle remains the same as it did four years ago.

The partnership approach also extends to suppliers, including Lex Autolease, which is sole supplier of its vehicles.

McGuigan says: “They were giving us the deal we wanted and the level of account management we needed.

"We have freedom to shop around, but we receive benefits as part of the service, such as consultancy which is very helpful. There is also a no-quibble tyre policy.

“We found a big company that is looking after us like a small company would, with people that know us and understand how our policy works.”

Where possible, services are delivered through local providers, such as dealerships, to support the local economy.

Future areas of focus will include fuel management to ensure efficiency is maximised following an increase in vehicle numbers, with greater use of fuel cards, including current supplier Allstar.

There is also an ongoing focus on ultra-low emission cars, despite the current challenges over Government policy in the long-term.

McGuigan said: “We are pushing to make sure that charge points are put into new properties, so when our maintenance division takes over after they are built, they could use electric vehicles. It future-proofs the fleet.”

Construction, civil engineering, property development and facilities management companies, the Eric Wright Group, has taken on a Vauxhall Ampera in a four-year test case that could influence the future of its fleet.