Foxtons: 'We run our fleet like a rental company'

Was this article useful?
5 people found this useful
4 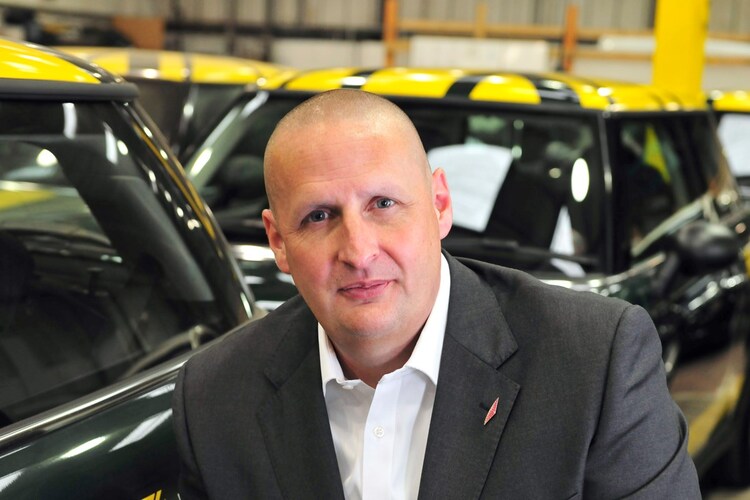 When the nature of his business means staff may change cars every six months, it’s not surprising that Ken Needham says he operates his vehicles like a rental fleet.

Needham, director of fleet and logistics at estate agency Foxtons, is responsible for one of London’s most recognisable fleets. Nearly every Friday, following a week of training across the business, a new cohort of junior sales staff will arrive at the North London fleet depot to collect the keys to their first company car.

“Our staff are all young, enthusiastic estate agents, whose sole purpose is to sell a house,” Needham says.

“Many join the company straight after university and haven’t driven a car since they passed their test, while others come from Italy and France and have never driven on the left.”

The fleet team carries out a comprehensive handover to ensure the drivers are comfortable with the vehicles, referring drivers who may need a little extra tuition to AA Drivetech.

The estate agents have rolling six-month targets. Once they achieve a  sales target, their manager will refer them back to the fleet department and they will collect their ‘new’ car from the next tier.

“Very few people, other than directors and senior managers, will stay in a car for three years. We’re not your standard three-year car scheme. Almost every car is recycled. We run it like a rental company,” says Needham.

Each car enters the workshop and undergoes the same inspection, repair and refurbishment process, whether it is three months or three years old, ready for reallocation or return to a leasing company.

“Whenever a driver is given a vehicle, it may not be brand-new, but it will look awesome,” says Needham.

Even brand-new cars go through the process – Needham’s team ensures the vehicle is valeted and any blemishes are removed.

“We’re very brand-conscious. Those cars must represent Foxtons well. We look after our vehicles, repairing them to a safe standard,” he says.

“When we return them to the leasing company after three years, they’re generally very happy.” Consequently, damage recharges are minimal.

Needham’s attitude to fleet management makes sense given his background – an engineer by profession, he was previously involved in leasing and rental, with one of his roles developing a PDA-based ‘inspect and collect’ system for Inchcape Automotive’s refurbishment division.

Nor is he averse to getting stuck in and working on the fleet next to his mechanic.  His technical background makes him an advocate of training and qualifications.
“We’re now a member of ACFO, I’m a member of the ICFM (Institute of Car Fleet Management) and the IRTE (Institute of Road Transport Engineers) and I’m putting our fleet supervisor, Millie Sollitt-Davis, through the same diploma courses. Training is important to us.”

The Foxtons fleet is managed by what Needham describes as a ‘lean’ office team of five, including himself.

“They’re a small, very focused team who completely understand what we do,” he says.

In addition to his admin team, Needham employs a mechanic and two valeters in the workshop, with third-party suppliers repairing and replacing windscreens and carrying out small repairs.

The company’s depot is also home to a BMW servicing bay, operated and staffed by a trained mechanic from local dealer Barons. The Minis on fleet are supplied with the brand’s TLC service plan, and the facility can also undertake warranty work.

“We pay for all our parts and additional work at the standard rate (or take advantage of service plans), but the benefit to us is in efficiency – we don’t have to ship cars out to a dealer’s workshop, which saves a great deal of time,” says Needham.

Saving time and making efficiencies to processes and systems has been one of his priorities since joining in 2006.

“Time is massively valuable to us – it’s the one thing you can never get back,” he says.

Having the solus bay in-house means Needham’s team can be more flexible – if an urgent job comes in, they can adjust the priority of the work to suit.

Foxtons specifies and orders batches of vehicles through manufacturers, with Needham then awarding a contract to fund them to a leasing company.

“We won’t always go with the cheapest monthly rate, but we’ll use historic experience of the leasing companies to award the contract. Return costs are important – it’s no good having the cheapest upfront rate if all the costs are loaded at the back end.

“We’ll also take into account ease of administration. We get a large number of tickets – more than we’ve ever got before, due to the increase in cameras on junctions – and deal with them in-house. If you don’t have the right infrastructure in place, they can escalate quickly.”

“All my leased vehicles are on non-maintained contracts, and we do as much as possible in-house.

When analysing wholelife costs, Needham’s process is also a little different from the norm – when looking to add a vehicle to the fleet, he will get a demo model in  and strip it down to identify the cost of specific parts, and ease of access and replacement.

“I need to understand what work can be done on-site, and what has to be done at a dealer.”

He explains that a mirror change on a Mini can be done in one minute 32 seconds; for the new Smart Forfour, Needham says it takes 37 minutes.

“We lose a lot of door mirrors, mainly glass, but whole housings sometimes. We need to understand the costs of our routine work, in both time and parts.”

Needham has had to work hard to improve the efficiency of the fleet since joining the business.

“When I started, it was a petrol-powered fleet, with a large number of high-performance, inefficient cars. Now we’re a PLC, and you just can’t have that mentality.”

He adds: “Now, we’re predominantly diesel. One of the main reasons for that was the sub-99g/km congestion zone exemption – that was a considerable cost for us.”

The fleet now has an average CO2 emission of 116g/km, and is looking at where it can use alternative fuels.

“Anyone who develops a city car with emissions below 74g/km will get a big order from us, not just because of the exemption, but because of our environmental impact.

“Every morning in summer as I come into London, I see a haze of fog and smog. I have 1,200 cars in central London. I have a duty to assist in mitigating that horrible smog. We’ve already smashed our CO2 target (based on the EU standards), and we want to hit 95g/km average by 2020.”

With the introduction of the Ultra Low Emission Zone in the capital on the horizon, Needham says it shouldn’t cause any issues.

Needham says he is always looking to future developments to increase efficiency: “Peugeot’s HybridAir system (using compressed air) and Hyundai’s hydrogen plans are on my radar.”

He already has electric, plug-in hybrid and range extender vehicles on fleet, though still in small numbers.

“Our two managing directors both run Porsche plug-in hybrids. The message that sends out to our staff is massively positive.

“At the fleet depot, we run a number as pool cars, including a Golf GTE, two BMW i3s, and a Vito e-Cell electric van. We don’t yet have them at branches as the infrastructure isn’t there at present.”

He also sees telematics as having the potential to deliver further efficiencies.

“We’re embarking on a trial with one of our leasing providers, Marshall Leasing. We’ve used basic telematics in the past for mileage reporting on some of our higher-end vehicles, but now we are investigating rolling it out to other vehicles.

“We’ve had a lot of crash-for-cash instances, events where cars have been ‘hit overnight’, that we think telematics can provide hard evidence for.

“I can also see the benefit for our inexperienced drivers. A lot of them don’t understand or notice the warning lights, so if the car can report back to me, we can get it booked in and provide proactive service, as opposed to reactive.”

Foxtons faces other complications  operating in the capital, including a high volume of permits for on-street parking. Needham says it’s important that leasing providers’ systems either allow the company to process these fines and permits themselves, or have good web systems capable of allowing remote management.

As well as managing fines, the company undertakes its own accident management, and will be the first point of contact for anyone involved in an accident.

“When you’re dealing with young, inexperienced drivers, often who don’t have English as a first language, you need to give them support and talk them through dealing with the incident,” says Needham.

The company switched to the 1link service-booking platform in the past year – retaining links with its existing supplier network, but reducing the administrative burden. It has also reduced phone calls for special-case authorisation, reducing pressure on the fleet team out of hours.

Moving away from the 'Foxtons mini'

At one point, the Foxtons fleet had more than 800 branded Minis. That number is now considerably less, but BMW and Mini vehicles still make up 58% of the company’s fleet. Not all entry-level staff will get a branded Mini – the fleet also includes city cars such as the Vauxhall Adam Volkswagen Up and Skoda Citigo.

“The five-door model has been great for us. Every new vehicle going onto our fleet is now five-door. Simply, it means our customers are happier”, Needham explains.

Part of the Foxtons model is that estate agents will physically transport their customers to a viewing. In one of the world’s busiest cities, Needham says it avoids wasted travel time and no-shows at appointments.

It’s another reason the safety and public image of the Foxtons fleet has to be impeccable.

“The main benefit is it’s legally a five-seater. It means we can now carry a husband, wife and two children to a viewing together. Yes, it’s cosy, but it’s practical. It means the customer doesn’t have to worry about parking the car.”

Above Minis, Needham is keen to ensure that all vehicles on fleet keep an ‘aspirational’ image, and says that  provision of a car is a key part of the company’s HR and benefits package.

“The fourth tier car we currently use is an automatic Mercedes-Benz A-Class. It’s a very aspirational car – something that’s important for our drivers.”

“If you’re 24 years old and taking a Mercedes home to mum and dad at the weekend, you look like you’re doing well.

“The level above that we call ‘super car’, again achieved as reward for hitting targets. It’s not a Ferrari or a Lamborghini, but generally a car with a list price in the region of £40,000 .”

City car and small hatchbacks still account for 80% of the fleet, and keeping the fleet fresh is important to the Foxtons brand.

“We’re about to introduce a new model onto fleet for our entry-level staff, the Smart ForFour. It’s a great car, chosen because it fits well with our brand.”