Future Plant Services: ‘It’s the right thing to do’

This is the philosophy of Tommy Knott and Ben Holleyhead when deciding whether to invest in new fleet initiatives, reports Sarah Tooze 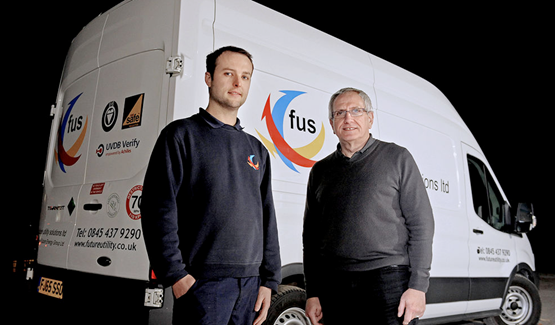 Tommy Knott and Ben Holleyhead reply in unison when questioned about their reasoning for implementing a string of new fleet initiatives: “It’s the right thing to do.”

For Knott, plant and fleet manager at Future Plant Services, the ‘right thing’ is to take the Transport Manager CPC (Certificate of Professional Competence) course. The company has a restricted O-licence (operator’s licence) rather than a standard one so, technically, it doesn’t need a transport manager.

“It’s the right thing to do,” says Knott. “The company is quite forward-thinking and realises that, although not strictly a requirement, having a transport manager is something that will be a great benefit in the longer term.”

Future Plant Services is part of the Future Energy Group, a utilities infrastructure provider whose head office is in Birstall, near Leeds, and whose other companies are Future Utility Solutions, Future Metering Services and Future BioGast. Future Plant Services supports the group of companies on all projects, managing a fleet of 76 vehicles (24 cars, 42 vans and 10 HGVs) in addition to offering plant hire solutions to external clients.

The van fleet has nearly doubled over the past three to four years as a result of business growth.

“We’re going into different areas,” says fleet controller Holleyhead. “For the past two or three years we’d never really been in London. Now we’ve got loads of work down there so we’ve got to expand a bit more and employ more people.”

Holleyhead has been involved in the day-to-day running of the fleet for eight years, while Knott joined in July when the then plant and fleet manager retired.

Knott previously had a sales role at Fusion Provida (which was taken over by Wolseley), promoting plant hire and then gas pipe fittings, and used to sell products to the Future Energy Group.

“When I started here I knew everybody because the Future Group had been a customer of mine for 14 years,” he says. “It was so easy to step into a new role; it was more like a transfer than starting a new job.”

The group’s compliance department currently handles licence checking, tachograph reports and the distribution of them to the various managers, as well as arranging CPC training and any other relevant training, but Knott intends for these responsibilities to come under his remit.

“We will be taking a lot of control from compliance and bringing it here,” he says.

The fleet team also intends to have greater visibility of Shell fuel card reporting, which is currently managed by the accounts department. Holleyhead points out that the varied work drivers do can make it a challenge to monitor how efficiently vehicles are being driven which is why he wants to take control.

“The hardest thing with fuel consumption is you’ve got one going to Inverness and another to, say, Bradford. Then you’ve got some drivers going to five jobs a day, some going to one, some that tow vehicles, some that don’t,” he says.

Despite the vehicles being spread nationwide the company does not have any issues with restricting drivers to the Shell fuel card network.

All Future Plant Services vehicles are funded through a combination of outright purchase, contract hire and spot hire.

The company has always had vehicles on spot hire as that gives it the flexibility to cope with business fluctuations.

“As work increases or people leave we’ve got to have that flexibility and movement,” Holleyhead says.

“It’s a bit more expensive than contract hire but you’re paying for the flexibility. If you sign up for another three or four year contract you’ve got that to pay out. Having a vehicle sat in the yard with no productivity is not something we like or our chairman likes.”

Knott adds: “It’s like savings, if you tie your savings up you get a better return but short-term you’ve got to have that flexibility.”

Using spot hire has also enabled the company and its drivers to experience different manufacturers and eventually led to it opting for Ford for the majority of its owned and leased vehicles.

“We took what we were given from the hire company so we had, for example, some VW Crafters, some Sprinters, some Ford Transits, some Iveco Dailys but, ultimately, the Ford ones we seemed to like,” Holleyhead says. “At some point we had seven or eight Ford Transits on hire and seven or eight we owned and we have continued it.”

The Transit, Connect and Mondeo are now the mainstays of the fleet while the directors’ company cars are Mercedes-Benz, Audi and Volkswagen.

Future Plant Services meets with Ford on a quarterly basis.

“It’s important for us because of the mix we have, we do buy as well as lease,” Knott says. “It’s the relationship we have with Ford that get us the best deals so I think it is important to have that manufacturer relationship as well as with the leasing company.”

Holleyhead adds: “We’ve got a good relationship with the local dealers as well. We’ve been working with Ringways for the past six to eight years, they are more than happy to drop what they’re doing and help us out because we’ve been using them for such a long time.”

Holleyhead says: “You know what you’re getting with it ; you know your costings straight away.”

To avoid any excess mileage charges at end of contract the company has a pooled mileage arrangement.

“At the start it was a bit hard to judge how many miles we actually did. We started off looking at the vehicles and thinking ‘hang on, he’s doing a lot more miles’ and swapped his car,” Holleyhead says.

“It’s difficult trying to work out how many miles we actually do a year because we’re in Inverness but last year we weren’t in Inverness. But the first rotation we did it on 40,000 miles a year. I’d prefer to be under than get a big charge at the end.”

Damage charges have not been an issue as the fleet has “very few accidents”, according to Knott.

Damage typically occurs at building sites rather than out on the road and the company is quick to carry out repairs.

“We try to keep on top of damage; it’s image at the end of the day,” Holleyhead says.

TCH takes care of accident management for the entire fleet, not just the 36 vehicles Future Plant Services leases from it, and provides reports on a quarterly basis.

“It used to be annually, then six-monthly,” Holleyhead says. “We’ve recently asked it to be quarterly so we can look a bit further into the risk management side of it.”

The report includes information such as the time of day that incidents take place, average cost of damage and whether there are any patterns of the same people having accidents. It also provides comparisons against previous years.

“It’s a generic report that we can act upon if we need to,” Holleyhead says.

Future Plant Services uses its plant hire software to monitor when vehicles are due for a service or MOT and to keep track of repairs.

Tracking devices are fitted to the commercial vehicles but are “antiquated”, according to Knott, and they are now looking at driver-behaviour-based telematics systems and in-cab cameras.

“One system we’ve looked at links in with your tachograph as well so you get real-time information from your tachograph,” Knott says. “We have tachographs in all the vans because we tow with them but we’re looking along the lines of we’ll put them in 10 HGVs and see how it goes from there.”

He adds: “We’ve got teams of two as well and they both drive. That’s a factor in why we’re doing it. There are different alternatives out there, you can use keypads, you can use fobs but we’re favouring a driver-facing camera so there is no dispute.”

One of the systems they have looked at includes forward-facing, rearward-facing and driver-facing cameras. Although they have not had any issues with false insurance claims, Knott and Holleyhead recognise that as the vans are branded they are vulnerable to fraudulent claims, and they would like to “safeguard” drivers.

“If someone puts an insurance claim through and we get asked ‘well, what happened?’ we can say ‘here you go, here’s a video of it. It answers all your questions’,” says Holleyhead.

However, Knott says the main factor behind upgrading is “being proactive in terms of risk management”.

He says: “We are looking at driver feedback information, and being proactive in terms of how the drivers are driving and what we can do to train them to be better drivers. It’s not because we’ve got a bad accident record.

Holleyhead adds: “It’s the right thing to do.”

When the cars are due to be replaced in March, the company hopes to reduce average emissions further but is unlikely to opt for electric vehicles as the drivers do more motorway miles than urban driving.