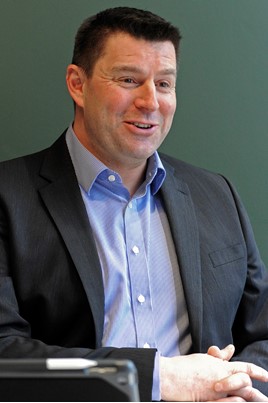 Simon King has a simple way to illustrate how much carbon he hopes his new environment strategy will save: 4,000 tonnes of CO2 or “twice the size of Sherwood Forest”.

The fleet and procurement director joined Mitie in July 2018 and immediately set about evaluating the vehicle strategy at the outsourced facilities management and energy services company.

“For the first 60 to 90 days, I was seeking to understand the situation – what worked well and where the opportunities were to improve performance,” King says. “This is where it became apparent that we needed within a clear strategy an opportunity to take a market-leading position on electric vehicles – 93% of our carbon footprint is in fleet.”

Support from the executive team came easier than expected.

“I spent all day Saturday writing my presentation and they said ‘you don’t need to persuade us’. It was a 10-minute talk, not a much longer presentation. Mitie understands that this is an important area,” King says.

His environmental strategy focuses on electric vehicles (EVs) and involves three elements: a commitment to convert 20% of the small vans and cars to fully electric by 2020; recognition that infrastructure/charging points and driver behaviour are major road blocks that need to be unlocked; and a commitment to spread the environment focus beyond Mitie to its customers.

With a small van and car fleet totalling a little more than 3,500, the strategy will see 717 EVs brought into the business by the end of next year.

Mitie will install around 230 chargepoints at its offices and another 600 or so at employees’ homes, representing a “significant investment” with supplier Pod Point. It was chosen because of its ability to offer smart chargers that balance the load through charging hubs, and for its software solutions.

The project is being led by Mitie’s own energy team, which can also provide on-site solutions such as battery storage facilities.

“It’s one of the reasons why we can do all this so quickly,” says King.

The energy team has identified potential difficulties with inner city residential charging, so Mitie is working in partnership with other organisations to lobby local authorities to improve the infrastructure. “We want to work together,” King adds.

The first office and home chargepoints will be installed this month, with King anticipating 290-300 EVs coming onto the fleet during the May-to-September window. One-third will be Nissan eNV200 vans; the rest will be cars.

He is re-writing the vehicle policy to make EVs the default choice. “For both cars and vans, unless there are circumstances where diesel is more suitable or there is a business requirement for it, then electric is the default.”

However, the speed of uptake will largely be dictated by vehicle availability, and this has forced the company to widen its traditionally very narrow choice list.

“Historically, we were Vauxhall for our cars. But with EVs, you can’t go for a single manufacturer so we are engaging with all the manufacturers that can support us,” King says. “We are looking for good performance (range, recharge speed) and commercial offering.”

Broadening its choice list has helped Mitie to overcome any driver reluctance to embrace electric. It also surveyed 1,200 potential EV drivers to gauge their interest. Within three hours, 44% had responded; Mitie closed the survey on 80% – a clear indication of the growing appeal of EVs.

The survey asked for details on length of journey, average mileage and the ability to have home charging. King was looking for drivers with regular, shorter profiles – five trips of 60 miles each rather than one 300-mile journey.

“The survey showed the best fit among our workforce and also showed how we can expand the programme as more vehicles are launched,” he says. “We see 80-90% of charging taking place at home or workplace, but it does require a change in driver behaviour.”

To address this, Mitie will introduce driver training which explains the mind-set necessary to make electric work as a fuel option.

“With diesel, you drive until the light comes on and then find a fuel station to fill up,” says King. “With an electric car, you need similar behaviour to topping up a mobile phone – you plug in at every opportunity to get to keep it constantly charged.

“That change in usage will require some support and training of our workforce.”

Although, ultimately, he didn’t need to do the hard sell, in his original report for the executive leadership team, King outlined a number of reasons for introducing an EV strategy.

Reducing carbon was “the big one”, particularly as the size of Mitie’s fleet means its impact is significant. Added to that was the in-house expertise of the Mitie Energy division which is able to buy electricity from renewable sources.

Mitie has also signed up to the Clean Van Commitment as a public display of its environmental aspirations, including air quality, providing the company with positive publicity, and it has the support of its employees, which is a big motivating factor.

“We have to make a commitment now and slash our carbon footprint,” King says.

However, none of this would be possible if the financial case didn’t stack up; after all, Mitie is a commercial business with shareholders to satisfy.

“One reason why we can do all this is because it is cost-neutral with exponential value,” King says.

“EVs are more expensive, but the residual values are holding up well and the fuel costs are lower. So, when we look at the total cost of ownership including the infrastructure investment, it’s cost-neutral.

“We have a tipping point on cost and that gap will grow (in favour of EVs) when they become cheaper, diesel becomes more expensive and the (diesel) residual values fall.”

He adds: “We have a handful on fleet now; we know their range and usage and we are confident we can hit the figures.

“The ‘little and often’ charge-up means we can manage the range requirement which is typically 80-90 miles per day. We are starting on a like-for-like four-year operating cycle but we will continue to review with Lex.”

The next step will be to expand the EV initiative beyond the confines of Mitie’s own business and into its customers.

“We have already been contacted by a local authority and a tech firm on how we can help them to change,” King says.

Observant readers will have spotted the fact that Mitie is bypassing plug-in hybrids and going straight to electric. King explains: “We believe this is the right decision. In the vast majority of cases, the choice is electric or efficient diesel. We look at all the technology and if a different one becomes available, such as fuel cell, then we will consider it.”

A positive by-product of introducing electric vehicles is safety, one of King’s priorities. EVs tend to come highly equipped with the latest technology, such as autonomous emergency braking and pedestrian avoidance technology.

Mitie already deploys telematics across its van fleet and has introduced a driver risk management framework that looks at performance on the road with intervention measures to improve their skills.

It is also keeping a close eye on mobility services and autonomous vehicles but they remain something for the future; for now the focus is squarely on ensuring the EV strategy works.

* To find out more about Mitie’s EV plan, register for Fleet Live to hear from Simon King. 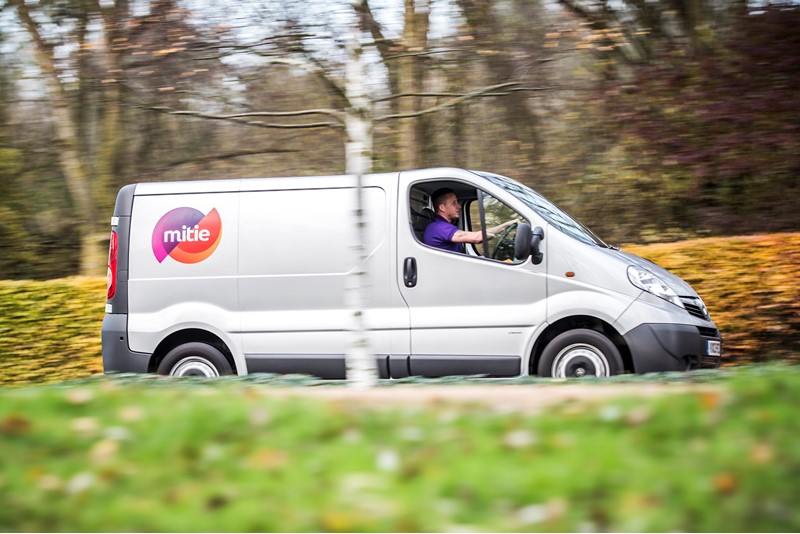 Simon King is responsible for all aspects of fleet management, but says his day-to-day strategy can be summed up by four core areas:

1 Safety, which is “priority number one”.

2 Meeting the needs of the business and its customers.

With a background in procurement more than fleet management, King recognises that his profession often “gets a bad rap” in fleet circles with a perception that cost takes precedence.

“But we are focused on delivering total value – to Mitie and our customers,” King says, pointing to five pillars that underpin his approach.

“Cost is important but it’s not just about price, it’s also about specification; quality and safety link into our fleet strategy; the service that we get from suppliers; ethical and sustainable supply; and innovation – new ideas and ways of working that our suppliers can bring to us,” he explains.

“We had a strategic supplier day with90 suppliers in February, including our key partners like Lex Autolease.

“We work with them to generate exceptional value every day. If procurement is done properly, it adds value.”

MITIE gets hi-tech to make fleet safer and greener

Pod Point has supported Mitie’s transition to an electric fleet with 800 new chargepoints by 2020.