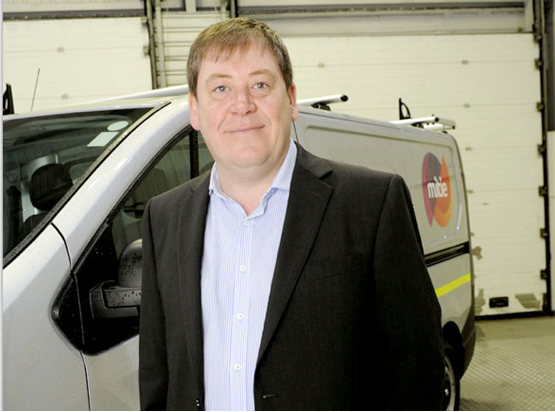 A time of “massive change” – that’s how Simon Gray describes his first 15 months as head of fleet at Mitie.

During that period, Mitie has downsized its fleet team and started outsourcing a large part of its fleet management to Lex Autolease.

Of course, when your fleet is replacing 100+ vehicles every month, change is a common currency. It requires robust operating controls and reliable suppliers to ensure the process doesn’t descend into chaos.

Historically, Mitie’s fleet solution was to manage everything itself in the belief that it was squeezing every last drop of efficiency from the process. Vans were bought outright, then funded through internal arrangements, and fitted by its own technicians, while cars were funded in a variety of ways, including contract hire.

There were efficiencies, but it was also a complex set-up – not helped by the fact that different parts of the Mitie business were responsible for some elements of their fleet.

Last year, everything began to change with a decision to outsource a sizeable element of the operation to, and increase the working partnership with, Lex Autolease. The four-year transition programme started in May and Gray believes he has struck the ideal balance between in-house controls and outsourced efficiencies.

The catalyst was the coming together of the company’s various divisions into a more centrally administered business with cross-company decisions becoming easier to implement.

“We have outsourced to Lex to bring our fleet management into the most efficient supply base possible,” Gray says. “We have unified our approach and it is easier to manage.”

One of those efficiencies was to streamline the number of supplier partners and funding options. Contract hire with maintenance via Lex Autolease is now favoured for cars and vans, while suppliers outside of direct vehicle supply have reduced from around 50 to three (Allstar, Jaama and Masternaut).

“When I took over we fitted out our vans in our own garage – we have streamlined that via Lex into Gentili,” Gray says. “We have one main provider, Lex, for our main vehicle supply baseline, and our other suppliers feed into that relationship, including Vauxhall and Lookers Group. There are cost savings but also operational benefits by reducing our supplier base.”

They are supported by administrators who sit within each business to oversee day-to-day functions such as licence checking, fuel cards and vehicle changes.

“The administrators put the central team closer to the business,” Gray says. “My approach is all about customer service and I expect all our drivers to have the same experience and be dealt with in the same way no matter what they drive.

“We expect them to have a retail experience, not a company car experience, when visiting dealerships.”

So far, Lex Autolease has taken on responsibility for asset management, including accident management, and van fitments. Ultimately, it will also take on driver management and be tasked with identifying fleet efficiencies, such as incident rates and risk.

“It’s a change of tack for Lex; it’s not just managing the bonnets, it’s managing the people and the risk,” Gray says.

He manages his supply chain through a structure of agreed targets, service level agreements, operational procedures and governance, with benchmarking written into the contract to ensure Mitie always receives value for money. Key to making the relationship work is openness and transparency.

“When you decide to go with one supplier, you have to give them everything. Lex has our details on cars, accidents and vans, but also fuel spend and location by driver so they can link it together,” Gray says. “The next step is to link them into our telematics provider so they can fully understand the day-to-day operation of our business to drive the required efficiencies.”

“We take the view that they are an extension of the Mitie fleet team,” adds Gray.

Mitie has a fleet of almost 6,900 vehicles – 2,700 cars, 4,100 vans and 91 other vehicles, from HGVs to road sweepers and gritters – plus a further 750 people who receive a car allowance. They are required to comply with fleet policy both for vehicle choice and driving behaviour.

Brands and specifications are restricted for ease of reallocation and management, plus preferential discount terms. Some 80% of the fleet is Vauxhall, including all vans apart from specialist vehicles, with additional brands Audi, BMW, Jaguar, Mercedes-Benz, Volvo and Škoda on the car side.

Perception is an important criteria alongside total cost of ownership. “We are a low margin business,” says Gray.

He works “hand-in-hand” with the procurement department to  ensure commercial contracts fit the Mitie framework.

“We are all fighting the same cause and that’s for Mitie,” he says.

“In this industry, supply agreements can be a discussion; however, where required, they need to be formalised with values and agreed volumes.”

Fleet efficiency is not the only important consideration for Mitie; safety is also a priority. When Gray joined Mitie in 2011 as divisional fleet compliance manager (see panel below), one of his first projects was to introduce a driver simulator which is still used today.

He evaluated the approach taken by the police and MOD before appointing XPI Simulation to create a bespoke system which can mimic different driving conditions and solutions, for example, using mobile phones.

It was a big investment – around £100,000 including the mobile classroom – but the benefits go way beyond training and a reduction in accidents, according to Gray: “It’s an opportunity to talk to the drivers face-to-face about their job and the miles they drive, as well. And we use it to support our clients’ drivers.”

Mitie also carries out driver awareness courses, including winter driving and banksman training, which have been developed in-house over the past four years. With 13,000 drivers, training and awareness is a major part of the fleet team’s responsibilities.

Gray’s next challenge is to begin maximising the benefits offered by the more centralised group fleet function. First up is telematics.

“There was a previous view that we would provide the equipment and data access and each business used it how they wanted. Now we are developing a customer service approach; we operate the system centrally and report out the elements they should be doing,” Gray says.

“We have gone from simply managing the supplier to informing the business about usage and actions. As a result of initial work in this manner, we took out 84 vans last year by using the data to improve our efficiency.”

He is taking the same approach to fuel data... “we don’t send them loads of data; we summarise it and tell them what to do next. Our mind-set is if the report summary fits on their phone screen, they are more like to read it and act on it.”

... And daily rental: “Businesses used to book it themselves. We want to manage it so we can check hire needs and whether there is a better option, for example a reallocated car or getting an order placed.

“It is more efficient for me to manage that across the entire business,” Gray explains.

The past 15 months have seen the fleet undergo a major transformation, but there is plenty more for the fleet team to focus on, according to Gray.

“We have put the process in place across our fleet to ensure that the vehicle is safe,” he says.

“Now it’s about managing the driver to make sure they are looking after the vehicle so that we operate a safe fleet.”

During his time at the MOD, he offered a cradle-to-grave service of vehicle sourcing, delivering to soldiers all over the world. Latterly he managed the operations for the ministry’s vehicle depot near Tewkesbury, Gloucestershire, with stock   of more than 5,000 vehicles.

However, despite that experience, he concedes that it was still a steep learning curve when he left the Army to join the Mitie fleet five years ago.

Gray was appointed fleet compliance manager in Mitie’s facilities management division in 2011 with a brief to look at private fuel benefit for 1,000 drivers.

“The first thing I did was go on the internet to find out what that was, having not experienced BIK (benefit-in-kind) in my time in the forces,” he says. “It was not an easy project.”

He decided a blanket set of rules was not the right approach and, instead, sought to understand every driver’s individual position in terms of the car they drove and their annual mileage. He says: “Most drivers didn’t understand the benefits or the tax. We gathered the data and went through what it meant for each of them.”

The project resulted in the removal of the private fuel benefit which brought substantial savings for the vast majority of drivers. For the few drivers left out of pocket, Mitie offered an appropriate level of compensation.

“While it was a difficult project it was the best thing I ever did because it got me out into the business to meet the drivers and understand the workings of a large corporate,” Gray says.

It has become his mantra: “When you have a big, diverse, spread-out organisation, you can’t rely on the driver handbook and fleet policy; you have to go out and speak to the drivers.”

After a spell within the central team overseeing the risk and compliance policy, Gray was approached to go operational, running a divisional fleet.

Just over a year later, he was appointed interim head of fleet, taking the role permanently in December 2015.

Gray says: “Mitie’s fleet is a diverse; you need common sense and be a people person. The military gave me that. It also instilled a methodical method to achieving results. Mitie has an entrepreneurial attitude: if it works, they will do it.”